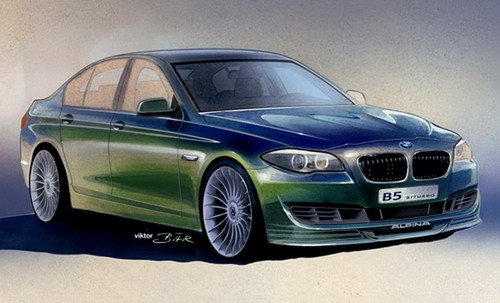 BMW tuner Alpina has just released a teaser picture of the upcoming B5 Bi-Turbo based on the 2011 BMW 5-Series, and announced that it will be unveiled at the 2010 Goodwood Festival of Speed. As this rendering reveals, the car will get the same traditional Alpina styling treatment with those signature wheels, but the engine specs are not known yet. It’s probably a Bi-Turbo Version of the create V8. But it won’t be as powerful as the new BMW M5 which will be reveled later this year, for obvious reasons!