Latest @ MW
Home /On the Future of In-Car Luxury… 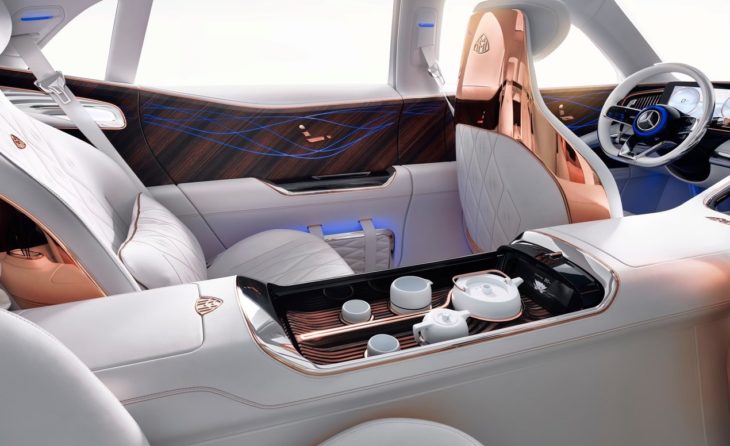 Ever since us sapiens forego the fun of hunting and gathering for the security of agricultural settlements, we’ve been perfecting the indoor. We started with our huts and extended it to our various modes of transportation. But while the interior of our houses has moved ahead by leaps and bounds, the inside of our vehicles seem to have been stuck in its roots.

We don’t mean that in terms of design, but what we perceive as luxury and refinement. For more than a century now leather and wood have been the defining features of every luxury interior. They’re such highly-regarded symbols of refinement that we’ve found a way to bring them to our cheap, basic cars as well. Granted, the wood and leather you find in cheap cars are synthetic stuff masquerading as animal and tree skin. But still, they look the same and serve the same function. As a wise but slow man once said, it’s become such a terrible old cliche. We think it’s high time somebody came up with a new way of decorating car interiors.

There have been good efforts, of course, but not many of them have stuck. Mercedes-Benz, for instance, experimented a while ago with trims made of stone. Turned out it wasn’t a feasible idea. Aluminum has been one of the more successful replacements for wooden trims, but that too is starting to lose its novelty. In recent years carbon fiber has emerged as the hot new thing for interior trimming, but again, it was only interesting when it was new and exotic and expensive. Now, to be frank, it looks like black plastic with a checkered pattern. Another new-ish thing is suede, best known by its dominant brand Alcantara, which has been quite successful at driving luxury buyers away from leather.

Now, the look and feel of suede may not appeal to everybody. And it certainly isn’t as refined as fine leather. But in this age of environment concerns and animal welfare, it is well that the industry has come up with something to strike a balance between conscientiousness and the need to stroke one’s vanity. Novel materials aside, car makers have also been busy trying to integrate intriguing features inside the automobile. Fitting cars with a touchscreen and connectivity gear is a must now for any car maker worth its salt. And there’s been a shift toward making automatic as many of the functions as possible.

That works for mid-range cars. For luxury cars and its makers it’s trickier. They have to come up with things that nobody really needs, but everybody wants. So they put massive screens anywhere they can, devise intricate stitching patterns, and even give you the option of having the bottom of your feet massaged. Needless to say, some of these features border on being ridiculous. You probably remember the recently-unveiled Maybach Ultimate Luxury. Turns out the the most “ultimate” feature of it was a heated tray in the rear console complete with a kettle and tea cups. These are, mind you, experiments. And they’re going to get better.

The right move, it seems, is to try and form new ideas around the concept of autonomous vehicles. That seems to be the coming trend, and visionary designers can have a field day with the possibilities that it offers. When self-driving cars go mainstream, car designers – at least those who work on the interior – are going to lose their jobs to architects. The cabin of an autonomous car is, for all intents and purposes, a living room, and it needs to be decorated accordingly. It is not insane to think you can have an electronic fireplace in there, sofas, chandelier, a bar, coffee machine, built-in cigar humidor, the lot. Now that’s true luxury, not wrapping everything in wood and leather.