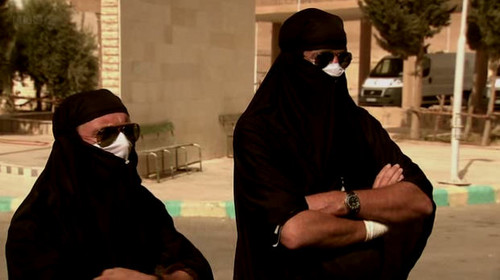 Not sure if you have seen the Top Gear Boxing Day special in which the trio attempt to get from Iraq to Bethlehem across middle east, but there was a very funny scene in which the presenters use burkha – an outfit that Muslim women have to wear in some countries – as disguise to travel into Damascus without being spotted. That apparently has caused trouble!

According to the reports Muslims are offended by the burkha scene and believe the guys were mocking their religion. Some hardliners are even speaking of protests against it. We think that’s just ridiculous. It was just three men in burkha, what’s the big deal. If Muslims wear kilts on television nobody will object!

You see if Top Gear offends someone in UK they just write to the Daily Mail about it and that’s it, but Muslims are a bit less friendly in such cases! We can’t wait to hear Jeremy’s comments on this.

All the controversy aside, they looked hilarious in burkha, specially James May with those aviator goggles!