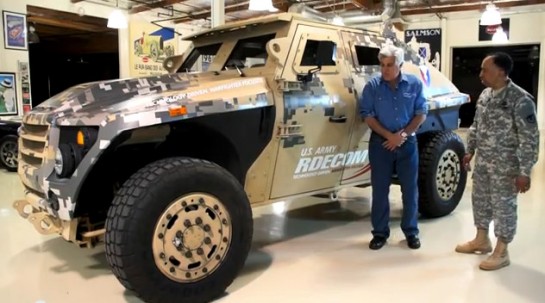 General Dennis L. Via and Chief Engineer Dr. Grace Bochenek from United States Army Research, Development and Engineering Command (RDECOM) drop by Jay Leno’s garage in Los Angeles to show off their new tactical vehicle which is like a more sophisticated, more economical, and safer version of the legendary Humvee.

It’s called the FED (Fuel Efficiency Demonstrator), which is a bit ironic, as it only does 7 mpg!

Apparently 7 mpg is a lot by Army standards, so the FED is considered quite economical. It also suicide doors, a four-cylinder twin-power engine with super and turbocharger, built-in gun holders, ABS, traction control, and a 30 gallon tank.