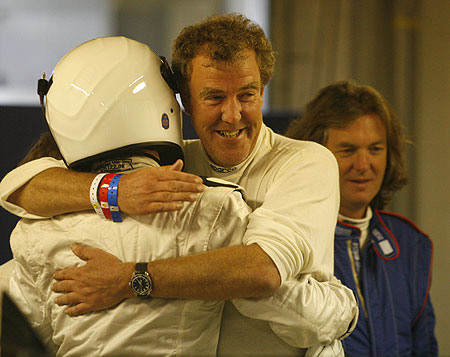 The recent stupid campaign to reveal Stig’s identity finally made Jeremy Clarkson to make a statement! He believes that unmasking the Stig will just spoils everyone’s fun. And he is totally right, what difference does it make if you know he’s Ben Collins or Damon Hill or Tiff Needell or…?! Follow the jump to read Jeremy Clarkson’s answer to this …

And immediately, the internet was awash with claims and counter claims.

“They’re wrong. There is no single Stig. There are four. The main one is Damon Hill. It’s Tiff Needell.

“No it’s not. I’ve got a mate who knows for sure it’s Michael Schumacher.” The frenzy has become so intense that even Top Gear researchers are being followed by the paparazzi. One was even outed in a national newspaper as the man in the white suit.

And because of that, I’ve decided it’s time to come clean. For still photographs, there are indeed many Stigs. But there is only one who is ever allowed to drive round the track.

I know. I know. It’s a big surprise but there you are.

And now you know, I’m afraid he will have to be dropped from a Hercules transport plane and killed. Worse, because the secret is out, the Telegraph will have to find another big secret to expose.

Might I suggest they look into Doctor Who’s Tardis because I’m willing to bet it really isn’t as big inside as the BBC claim.

Then they could explain to their younger readers that there is no such thing as Father Christmas. “It’s your Dad kids. Get used to it.”

from : Jeremy’s column in Sun