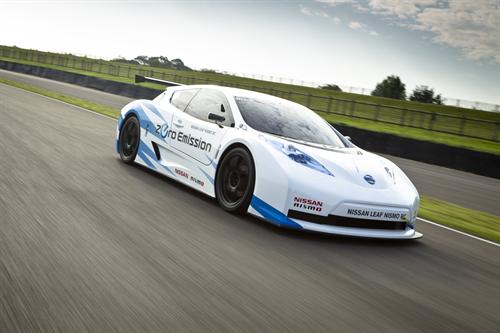 Nissan likes to do odd things to stand out at the Goodwood FoS. Last year they had stunt driver Terry Grant to drive a Nissan Juke the entire length of the course on two wheels, setting the stupidest world record ever. Now they announced their plans for this year’s festival, and Grant is back with another odd but according to Nissan entertaining challenge. They didn’t say what it is, but it involves a Nissan LEAF.

That’s the silly stuff. As for the serious ones, we have the  FIA GT1 world champion Michael Krumm driving the full 540 horsepower of his GT-R GT1 race car up the hill in hope to produce one of the fastest hill climbs over the weekend. The all-electric LEAF NISMO RC is also present at the event and will be tackling the hill, but no body expects this one to set any sort of record!

In the paddock and on display are the world-famous Nissan Juke-R and the frankly overpriced GTR ‘Track Pack’.The Track Pack costs 10 grand more than the standard GTR, but the performance difference is negligible. As for the Juke-R, this concept has now entered limited production. it’s built to order and costs more than $500,000 apiece!

Virtual gamers will also be able to participate in this year’s GT Academy competition. Sony PlayStation and Nissan have once again joined forces to take the best online gamers from around Europe and provide them with the tools to become a real life racing driver. There are three places to be won at Goodwood for the national final, eliminating the need to enter the first online round and potentially skipping past more than 100,000 competitors.