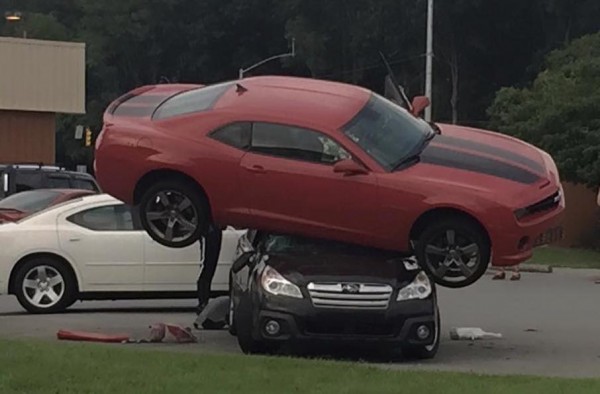 In what is quite possibly the weirdest crash of all time, a red Chevrolet Camaro was found sitting on top of a Subaru Outback in the parking lot of a shopping mall in Tennessee. Apparently nobody knows how this happened, so feel free to come up with your own theory.

Ours is that this Camaro is a secret killer robot and for some strange reason it found the poor Subaru threatening and tried to kill it by sitting on it. The Chevy is fat enough to suffocate the petit Japanese. Either that, or a giant came, picked the Camaro up and put it on top of the Outback!

The owner of the Subaru was in the store when the incident happened and the driver of the Camaro was seen jumping out of the car without any injuries. So nobody was hurt in this most baffling of car accidents. The driver of the Camaro will undoubtedly be questioned about how he managed to pull this thing off and he will surely be subjected to alcohol and drug tests as well.

We are going to keep our ears to the ground and find out how exactly this happened. We’ll keep you posted as the story develops. 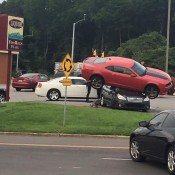 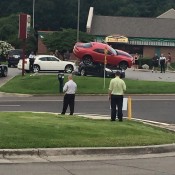 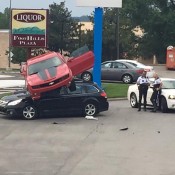