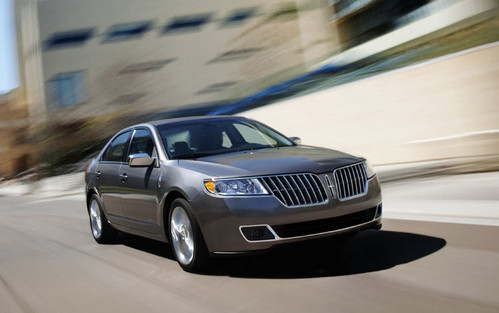 The new hybrid variant of 2011 Lincoln MKZ which at 41 MPG is most fuel-efficient luxury sedan in America now will go on sale from Autumn with a base MSRP of $35,180 including destination and delivery. The car is priced in the same range as its main rival Lexus HS 250h, but it’s also the same price as Lincoln MKZ V6 petrol, so potentially it can mess with its gas sibling’s market!

“Lincoln is about delivering luxury standard,” said John Felice, general manager, Ford and Lincoln Marketing. “Whether it’s our new MKX with standard MyLincoln Touch™ technology or the no-cost choice of a gas or hybrid powertrain with the Lincoln MKZ, we want to give customers premium amenities with unexpected value.”

The new 2011 Lincoln MKZ Hybrid is a game-changing vehicle that offers modern car buyers all the indulgence of a premium midsize sedan and all the environmental benefits of a hybrid vehicle at an amazing price.

Building on Ford’s reputation as a world leader in electrified technology, the 2011 Lincoln MKZ Hybrid uses the company’s second-generation hybrid technology – the 2.5-liter Atkinson-cycle I-4 hybrid engine – named one of Ward’s 2010 “10 Best Engines.” The system combines the best attributes of the gasoline engine and electric battery-driven motors to deliver optimal performance and fuel economy.

The Lincoln MKZ Hybrid delivers a 41 mpg fuel economy rating in the city, topping its only near competitor – the 2010 Lexus HS 250h – by 6 mpg. It also trumps the Lexus with more passenger space, more standard luxury and segment-exclusive safety features.

The following features come standard on the 2011 Lincoln MKZ Hybrid. They are either not offered at all on the Lexus HS 250h, or are available at an extra cost:

* Genuine wood trim – In addition to their exquisite appearance, the Swirl Walnut and Olive Ash wood trims offered in the Lincoln MKZ Hybrid are eco-friendly as well. The veneers come from well-managed forests, as defined by strict environmental, social and economic standards, and from other rigorously controlled sources.

* Bridge of Weir leather-trimmed seats – The world-renowned luxury leather from Scotland is unembossed, allowing the natural beauty and character of the grain to shine through. The leather is milled for up to 12 hours to ensure a buttery, soft hand, and Bridge of Weir uses a chromium-free tanning process, which makes it easier to recycle.

* Reverse sensing system – This system senses what drivers might not see behind them and relays an audible alert if objects are near, which increases in frequency the closer a driver gets.

* Keyless entry keypad – This Lincoln-exclusive feature provides secure entry at a driver’s fingertips. A personal combination holds a memory for driver preferences. So if an owner is out for a run and doesn’t want to take the keys along, the vehicle can be opened with the touch of a few buttons.

* Easy Fuel® (capless fuel filler) – This Lincoln-exclusive feature uses an integrated spring-loaded flapper door to eliminate the need for a fuel tank screw cap. That means no more fumbling to remove and tighten the cap and less fuel odor on a driver’s hands.

* Personal Safety System™ – This Lincoln-exclusive suite of seven protection technologies work together as a system to help protect vehicle occupants. The system includes dual-stage front airbags and an occupant classification system to sense whether the passenger seat is occupied. It tailors – or suppresses – airbag deployment to help provide an appropriate level of protection. It also features the Ford Belt-Minder® system to remind front seat occupants to buckle up.

* MyKey™ – This Lincoln-exclusive feature allows parents to program a key to limit speed and audio volume to encourage teens to drive safer and improve fuel efficiency. It also encourages seat belt use, provides earlier low-fuel warnings, and can be programmed to sound chimes at 45, 55 and 65 mph.

“Customers are very enthusiastic about the MKZ Hybrid and we think they will be even more excited to learn they sacrifice nothing to be able to go green in style,” said Felice. “We’re launching a world-class hybrid that beats all competitors, and at an introductory price that is sure to draw the interest of new customers to Lincoln.”