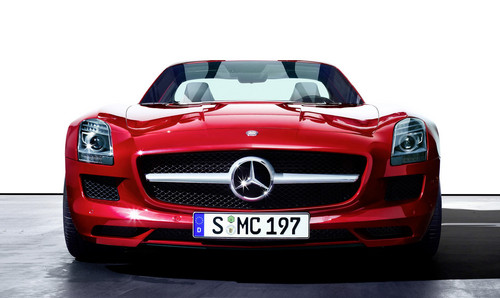 Ola Kallenius, the boss of AMG, recently had an interview with Auto Motor und Sport magazine and in that he commented on what we can expect from the company in the coming year. The most important AMG car of 2011 is without a doubt the Mercedes SLS Roadster, apparently set for debut at the 2011 IAA Frankfurt motorshow, which is good news for those who badly wanted an SLS but just couldn’t live the Gullwing doors.

The Mercedes SLS is one of the finest cars possibly in the history of automobile, but those doors, there’s a bit of an issue with them! And we’re talking about the fact that short people will have difficulty closing them, and not that if you roll it you can’t get out unless the explosive charges in the hinges go off properly! Surprisingly that tickles us!

No, the main issue with the Gullwing doors of the SLS is that when you open them in public people will think of you as a show off, a new-money, a co*k! The Roadster will solve all those problems with normal doors. Great then.

Apart from the SLS Roadster, in 2011 we will also witness the arrival of the new CLS63 AMG, and the AMG version of the 2012 SLK-Class. One new thing about the next SLK AMG is that it will get a fuel-saving cylinder deactivation technology for its V8.