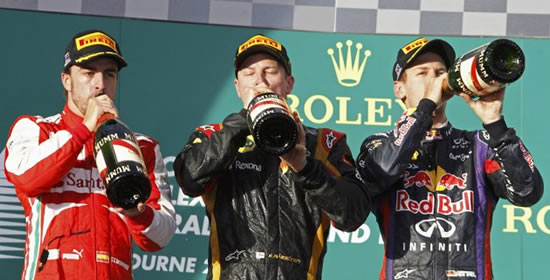 The 2013 Formula 1 season started in a rain-soaked Melbourne in Australia, where it was so wet it disrupted, delayed and ultimately prevented a whole Saturday’s qualifying, although they managed to complete Q1. Q2+3 took place on a damp track race-day morning. Red Bull’s Vettel and Webber managed to lockout the front row, with Mercedes’ Hamilton 3rd, Ferrari’s Massa 4th, teammate Alonso 5th and Mercedes’ Rosberg 6th.

The lights turned green on a dry track with damp spots and showers predicted. Off the line, Vettel retained his position into the first corner, with Massa, Alonso, Hamilton and Rosberg all taking advantage of a poor start from Webber. This allowed Massa to take 2nd, and Hamilton 3rd, with Alonso passing him later on in the lap.

Button and Webber pitted early on laps 5 and 6 with the Ferraris gaining on Vettel. Lotus’ Raikkonen showed form and began eating into the leaders’ lap times. Vettel made his first stop on lap 7, releasing a 1-2 for Ferrari. Massa pitted on lap 8 whilst Kimi continued to reel in Alonso, both pitting on lap 9. Going a little deeper, Hamilton made his 1st stop on lap 14, with Rosberg on 15, hoping to take advantage of a 2-stop strategy. 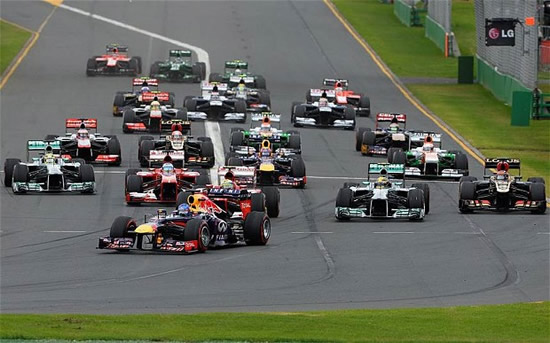 Showing a great comeback, Force India’s Adrian Sutil lead the race and began to bunch up the leaders, maintaining good pace despite pitting late on lap 21.

Webber made his second stop on lap 19, with Alonso lap 20, the Ferrari coming out in 7th. Vettel’s 2nd stop came on lap 21, putting him 7th behind Alonso, the Ferrari taking 5th from Sutil. The second Ferrari of Massa pitted on lap 23 and came out 7th behind Vettel. 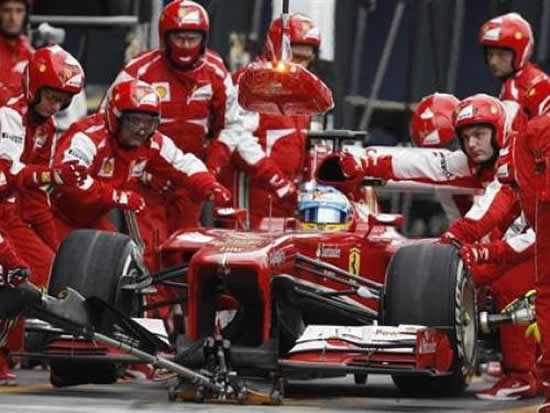 Williams’ Maldonado was the first casualty and went off into turn one’s gravel on lap 25. Two laps later Rosberg retired on lap 27 due to an electrical problem.

On lap 32 Alonso duelled with a defending and defiant Hamilton, eventually passing him after some great spectator moments. Hamilton then pitted, which released Vettel.

Massa made his final stop on lap 37 with Vettel pitting a lap later, coming out 5th ahead of the Ferrari but behind Hamilton. Alonso pitted on lap 39 and came out 3rd. Meanwhile, Vettel passed Hamilton with Massa passing the Mercedes near the end of the lap. Despite a 2-stop strategy, Hamilton had to make a 3rd stop on lap 42.

Raikkonen eventually passed Sutil to take the lead on lap 43. Alonso does the same 3 laps later for 2nd place and starts to hunt down the Lotus of Kimi. Sutil made his final stop on lap 46, and despite holding on well, Hamilton passed him on lap 52. 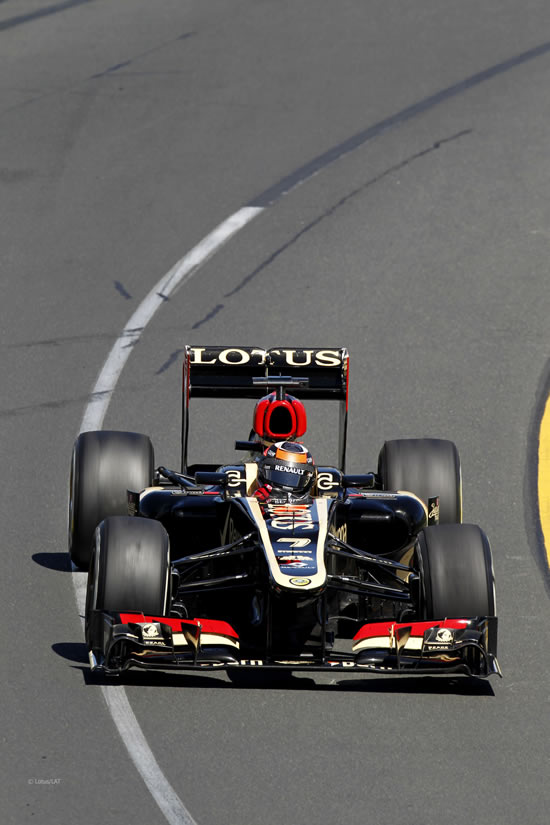 Melbourne showed how close the title fight is going to be in 2013, with the top teams all showing pace and the Pirellis proving delicate. Next up, Malaysia…