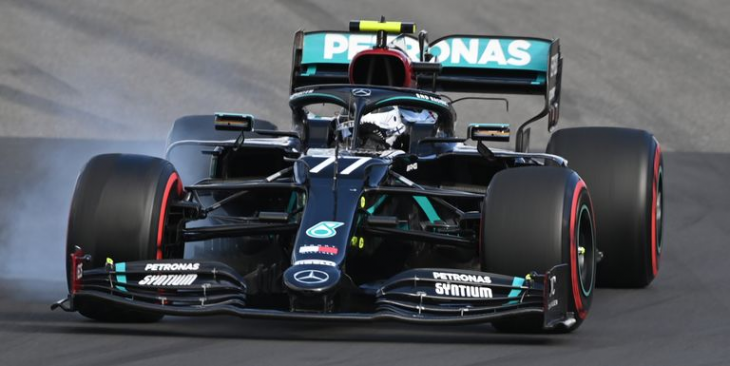 Although the driver market has been rather static within Formula One over the past few years, 2022 or the months leading up to it, could be the period where things finally start to become a lot more electrified.

Especially with one team in particular and with Mercedes currently licking their wounds after failure to win at the recent French Grand Prix, it is not just the 2021 Driver’s championship that they now have concerns about.

One of the reasons why Red Bull are doing so well this year, is because of the one-two combination of both Max Verstappen and Sergio Perez, something that Mercedes themselves have failed to replicate.

To the point where the stuttering started by Valtteri Bottas this year, is one that is now under increased focus and with each relative failure that is recorded by the Finnish pilot, the closer a permanent exit from the pit garage becomes.

With Bottas failing to be the rear gunner that Lewis Hamilton arguably needs, the conjecture is that the Mercedes driver duo needs something of a shakeup and if the rumours are true, it is seriously being considered by team boss Toto Wolff.

When pressed on this particular topic, the German has been tight-lipped in front of the media and although he has given nothing away in public, that is not necessarily the case in and around the privacy of the paddock.

Because there is one name that keeps coming to the fore and that is someone who has already had a taste of life as a Mercedes pilot. That of course being, the prodigious talent of Williams’ George Russell.

Acting as a stand-in for the then champion of 2020, Russell was trusted with taking the reins for Hamilton at the Sakhir Grand Prix and had luck not gone against him, he would have won on his Mercedes debut.

Going into the race itself, the odds by Unibet one of thebest well-reviewed sportsbook were rather tempting and for anyone doubting whether Russell could make the immediate transition from Williams to Mercedes colours, those doubts looked misplaced early on.

However, it was not to be the perfect debut and after his temporary teammates botched a pit stop, any hopes of the 23-year-old landing a fairy-tale win were cruelly dashed. Then again, his performance was certainly not forgotten either.

To the point where it has firmly lodged in the mind of the Mercedes decision makers, and it is a decision which this hotly tipped talent is wanting before the Formula One racing circus takes its summer break for 2021.

Because now it is time for Mercedes and by extension Wolff, to decide whether to stick or twist and if it is to be the latter, then surely the promotion of the young British star will be one that is finally facilitated.

In an ideal world, the end of his current loan move would be announced during the summer and if that were to be the case, then Russell would arguably be in a far more relaxed state for the second half of 2021.

However, if there is one thing that Formula One is not, it’s ideal and for as much as drivers want to know their future plans as early as possible, their potential paymasters have a habit of waiting until the last possible moment to make key decisions.

Of course, when it comes to movement in Mercedes, there is still the subject of what happens to the seven-time champion who is currently under their employment and with the recently knighted driver out of contract at the end of the year, a huge curveball could yet be thrown.

One that sees a number of potential moves and although the prospect of Valtteri Bottas getting promoted to the role of number one is a possibility, it is one that is considered somewhat unlikely at the same time.

Which means if Mercedes lose their biggest ace in Britain’s Hamilton, where do they go next? The answer to that could be a quick look around the Red Bull garage and if Max Verstappen were to clinch his first Driver’s championship this year, he would become the biggest asset in the paddock.

Whether Red Bull would be willing to see him go elsewhere is something that remains to be seen and of course, it would need a suitable vacancy at Mercedes. Then again, stranger things have happened within the confines of Formula One, so do not rule out such a move just yet.