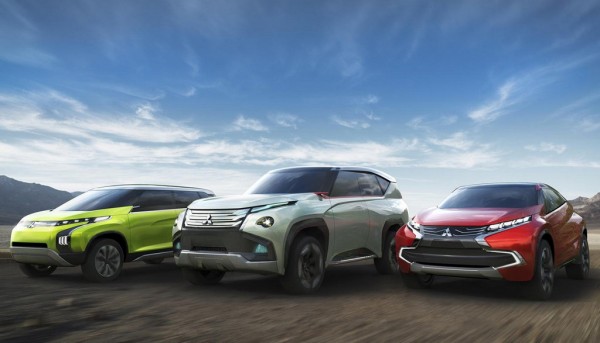 Following an intriguing teaser image, Mitsubishi now reveals the first shots of the actual concept cars they have prepared for this year’s Tokyo Motor Show. These good-looking concepts showcase a new design language that symbolizes the functionality and safety of Mitsu’s SUVs, says the manufacturer.

That juicy red one on the right is called the XR-PHEV and on the styling front, it appears to be a rival for Range Rover Evoque. In terms of performance, though, it is a full-blooded green car featuring a 1.1-litre direct-injection turbocharged MIVEC engine, a lightweight, compact and high-efficiency motor with a high-capacity battery.

Making full size SUVs is Mitsubishi’s forte, so they are also bringing along the GC-PHEV Concept. This four-wheel-drive model is powered by a plug-in hybrid EV (PHEV) system comprising a 3.0-litre V6 supercharged MIVEC.It also uses an eight-speed automatic transmission, with a high-output motor and a high-capacity battery; lot of clever stuff going on.

The least interesting of the three is the Concept AR, the green one on the left. This is a next-generation compact MPV which combines SUV manoeuvrability with MPV roominess and it has the same powertrain as the XR.

All three concepts feature MMC’s latest “e-Assist”. They are part of a 17-car lineup Mitsubishi will put on display at the 43rd Tokyo Motor Show.