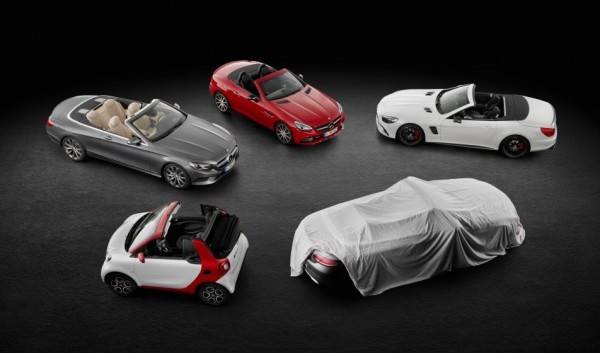 Mercedes-Benz revealed the main highlights of their lineup for the 2016 Geneva Motor Show, and it seems to be all about drop-top cars. In addition to the new SLC, SL, and S63 Cabriolet Edition 130, the show will see the world premiere of a brand-new product, the Mercedes C-Class Cabriolet.

So it appears Mercedes-Benz believes 2016 is going to be year of alfresco motoring and they want to have every segment of the market covered with a fine product. Not much is currently known about the new Mercedes C-Class Cabriolet, but it doesn’t take a genius to guess what the car looks like. After all, it’s a C-Coupe with the roof chopped off. The real question is, what will the new C-Cabrio (a modern-day CLK) do to the SLC-Class?

There is one more open-top model Mercedes is bringing to Geneva this year and that is the new smart fortwo cabrio with an exclusive look. But we are more interested in the Mercedes-AMG C43 4MATIC Coupe which is like a diet AMG car and on paper seems to have just the right specs for those who find the C63 just a tad too spicy.

A cool feature of Mercedes-Benz show stand is the stand itself with its unique design and “Silver Flow” ambience. It is made up of dynamically shaped, free-floating, large-scale sculpture consisting of silver slats accommodating a total of 37 vehicles. This year is also the tenth anniversary of the Mercedes-Benz Museum and they’re going to celebrate it with a special showcase of classic models — another reason they needed a big space.