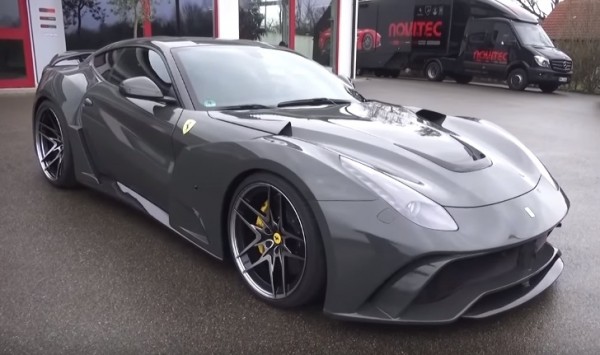 A few days ago Ferrari Specialist Novitec Rosso released a new version of their N-Largo kit for Ferrair F12 Berlinetta. The new model, officially called Novitec Ferrari F12 N-Largo-S and limited to just 11 copies, is substantially different from the previous kit, which is why an up close and personal look at it is completely warranted.

And as luck would have it, Shmee150 was at the tuner’s showroom last week and he has filmed the new Novitec Ferrari F12 N-Largo-S in all its glory. In this video he gives you a good look at the car and samples its exhaust noise, and also checks out the Novitec Torado Huracan N-Largo:

The “S” version of Novitec N-Largo is in some ways an answer to Ferrari’s own F12tdf, seeing as, just like that limited edition factory model, this limited edition factory car boasts a more elaborate design than the previous version and is all in all spicier and more aggressive, not to mention it costs more. Still, you have better chances of getting a F12tdf than an N-Largo-S. As mentioned, they are only building eleven copies of this beast.