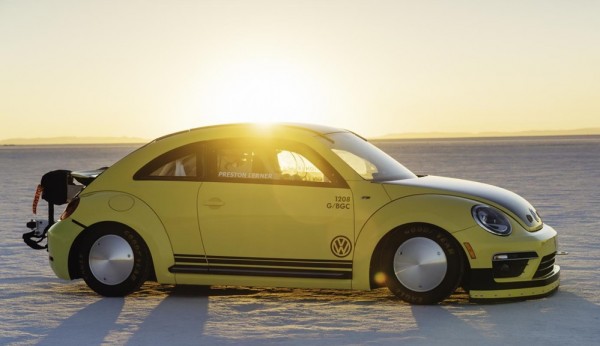 In one of the coolest and yet most pointless publicity stunts Volkswagen has ever conducted, the American branch of the company tuned a VW Beetle and sent it to the Bonneville Salt Flats in Utah for a speed record. The number this Beetle LSR managed to score was 205.122 mph over a flying mile.

OK, so this exercise has not been as pointless as said above because, for one thing, Volkswagen runs a Beetle in the Rallycross series and this record could boost that car’s track cred. What’s more, this stunt puts in perspective the potential of VW’s 2.0 liter turbocharged engine for tuning.

The unit they used in the VW Beetle LSR, modified by THR Manufacturing, develops a colossal – for a 2.0 liter – 543 horsepower and 421 pound-feet of torque at the wheels (more than 600 hp and nearly 500 lb-ft. at the flywheel). To be fair though it’s been practically rebuilt by the tuner with new turbochargers, pistons, camshafts, connecting rods, and head modifications.

Other changes made to the Love Bug to make it Bonneville ready include special Salt Flat wheels and tires fitted, a limited-slip differential, lowered suspension, full safety equipment, such as a rollcage, racing seat and harness, and a fire suppression system, and of course a pair of parachutes to help it stop. 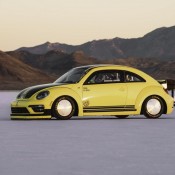 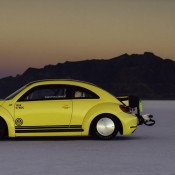 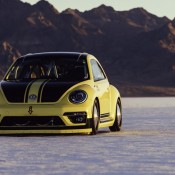