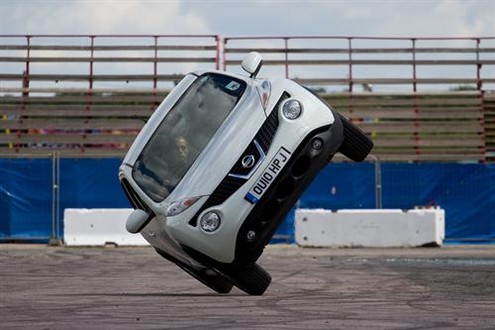 Nissan is putting the spotlights on more ordinary models at this year’s Goodwood FoS rather than the GTR flagship.

Their plans are ambitious, but Kinda silly. Nissan LEAF and Nissan Juke both are set to break records at the event. The LEAF will attempt to become the fastest car ever to be driven up the famous hill climb course – backwards, while the Juke will take the on the hill on two wheels and will try to set the fastest ever two-wheeled speed. So as we said, silly. But a lot of fun for the visitors!

The thing about the LEAF going up the hill in reverse is, the LEAF has an electric powertrain that, theoretically, enables it to be driven backwards as fast as it can go forwards. So in Theory it should be able to hit 90 mph. 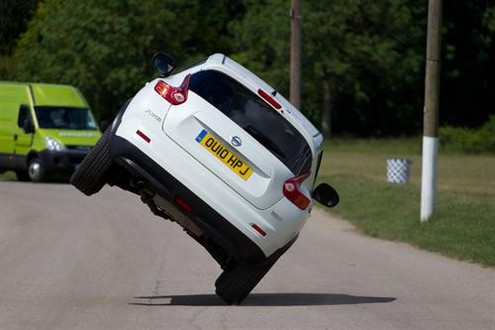 Here’s complete details on Nissan plans for this year’s Goodwood Festival of Speed:

The Nissan LEAF NISMO RC – the “Racing Competition” version of the electric car will make its UK dynamic debut.

The car is a purpose-built prototype that wraps production LEAF components and technology in a carbon fibre body and has been designed to show that electric cars can be fast and exciting. Like the production Nissan LEAF, a lithium-ion battery composed of 48 compact modules powers the NISMO RC version and a high-response 80kW AC synchronous motor generates 107 horsepower and 207 lb-ft of torque.

In a more conventional demonstration run on the hill climb course, one of the Sumo Power GT team’s GT1 race-winning Nissan GT-Rs..

Celebrating the second win in succession of the RAC tourist trophy at Silverstone in the FIA GT1 championship this year, the 600HP V8 car is visiting Goodwood for the first time. Behind the wheel will be Alex Buncombe, Nissan’s FIA European GT4 Championship and GT Academy driver.

Meanwhile, the road going 2011 GT-R will also take part in non-competitive supercar run and is sure to be a star attraction in the Supercar Paddock.

The 2011 GT-R offers drivers 523bhp and improved handling and feedback compared to its already highly-rated predecessor.

Joining the flagship GT-R in the Supercar Paddock will be the Nissan 370Z GT Edition, which not only celebrates 40 years since the very first Z-badged car arrived in the UK, Nissan’s GT racing success and the award winning GT Academy**.

There will be plenty for visitors to get involved with over Goodwood weekend, including the chance to try the road going Nissan LEAF for themselves as part of the Moving Motor Show on Thursday 30 June.

The wind tunnel-themed display features the ESFLOW concept car, an electric sports car for the future.  You’ll also be able to experience the new 100% electric Nissan LEAF in 3D and find out why the 2011 European Car of the Year is also going to be the car of tomorrow.

Anyone who thinks they can design their own car can put their skills to the test in the ‘Innovation Lab’. Or, if racing cars is more desirable then enter the GT Academy qualifying competition and follow in the footsteps of Le Mans 24 Hours podium finisher, Lucas Ordonez with Sony PlayStation Gran Turismo 5 and at the same time win some amazing prizes.

Visitors will be also be able to get ‘up close and personal’ with the Nissan 370Z GT Edition, the 2011 GT-R, LEAF, Juke and Qashqai.