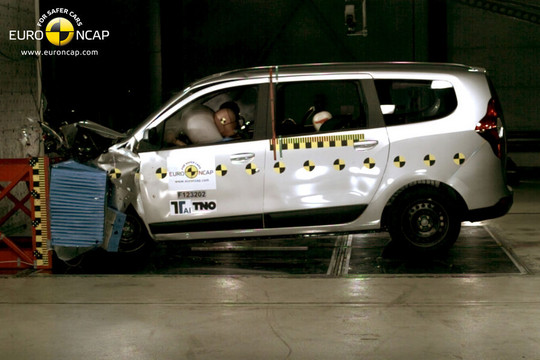 Have you ever wondered how Dacia manages to make such cheap cars? To understand that fully, you have to crash one of their cars, especially the new Lodgy van. In its latest series of crash tests EuroNCAP tested 15 cars and awarded all of them with five stars, except for Dacia Lodgy, which got 3 stars.

NCAP is really not happy with Lodgy’s performance. According to the test results, in the frontal impact, the screen pillar was heavily deformed at the top of the windscreen and the roof was bent in front of the B-pillar. Rear passengers are also in danger, as the floor panel and tunnel were completely separated, extending into the driver’s footwell and the transmission tunnel was deformed between the front seats.

It’s the same sotry with the rest of the vehicle. In pedestrian protection, the Lodgy’s score of 44 percent is unacceptable. All of the other cars in this group scored more than 60 percent. Child safety score was 77 percent, which again is nothing to write home about, especially for a so-called family car.

So, still want to save a few grands on your next car and buy cheap?