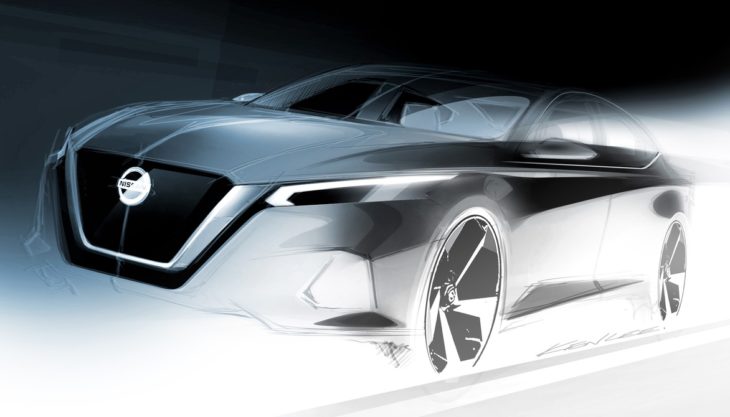 Nissan did not have anything interesting to show at this year’s Geneva Motor Show besides a new Formula E car. That could be because they are putting together an stellar show for the New York Auto Show, which is due at the end of March. They just dropped the first teaser for the 2019 Nissan Altima which is set for debut at the NY event.

The official rendering shows the new 2019 Nissan Altima from the front where the sedan features a prominent new grille, slim and sexy headlight, and very un-Nissan-like flared wheel arches. Nissan’s new corporate look with that signature grille which is modeled on their recent concept models is a good one, and it will work especially well on their lower range models such as the Altima since it gives them a more exciting appearance. And we will be seeing more of this as Nissan themselves confirms the new Altima “hints at the future of Nissan’s sedan design language.”

We are looking forward to seeing the rest of this car in the run up to the New York Auto Show. We’re particularly keen to see what they’ve done with the rear-end. If it’s a good as the front-end, 2019 Nissan Altima stands a good chance of shaking up the mid-range segment. Nissan has never had any issues with quality and features and powertrains. The only area where they lacked behind their main rivals is in terms of design, and with the new Altima they seem to have addressed that issue. Good days ahead for the Japanese car maker…