It tool a lot of effort and God knows how much money, but they’ve done it. Volkswagen has broken the record for the Pikes Peak international hill climb with the fully-electric VW I.D. R, setting an astonishing time of 7m 57.148s minutes which is a full 16 seconds faster than the previous record.

And that is the overall records we’re talking about, not just the time for electric cars. The 500 kW (680 PS) VW I.D. R is now the king of Pikes Peak in every category, and it will probably remain so for the foreseeable future. After all, it took five years for the previous record,set by Sebastian Loeb in 2013, to be bested. But then again, that was the age internal combustion. In the electric age things move at a much faster pace. So yeah, let’s not make any predictions.

The VW I.D. R Pikes Peak record also turned its driver, the French man Romain Dumas,into a legend. His name is now forever mentioned in the same breath as the giants such as Sebastian Loeb, Walter Röhrl (D), Michèle Mouton (F), Stig Blomqvist (S), Nobuhiro Tajima (J) and also Rod Millen and his son Rhys (both NZ). It was, in short, the perfect game. 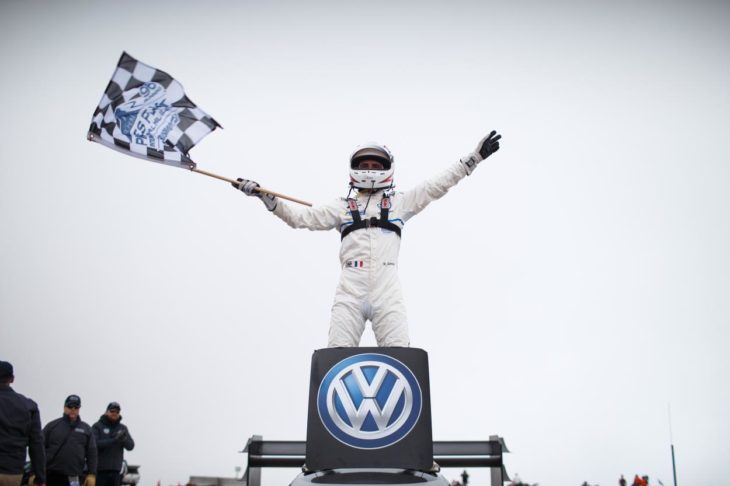 “The I.D. R Pikes Peak is the sporty forerunner of Volkswagen’s I.D. family. Today, we saw what this technology is capable of,” said Dr. Frank Welsch, Member of the Board of Management of the Volkswagen Passenger Cars brand with responsibility for “Technical Development”. “Every Volkswagen employee can be extremely proud of today’s result. I congratulate the team from the bottom of my heart. With a combination of outstanding engineering skills, passion and commitment, the team has managed to create a fantastic racing car in just eight months. The Volkswagen I.D. R Pikes Peak has now set the fastest time in the history of this hill climb, which spans more than 100 years – that speaks volumes for electric mobility.”