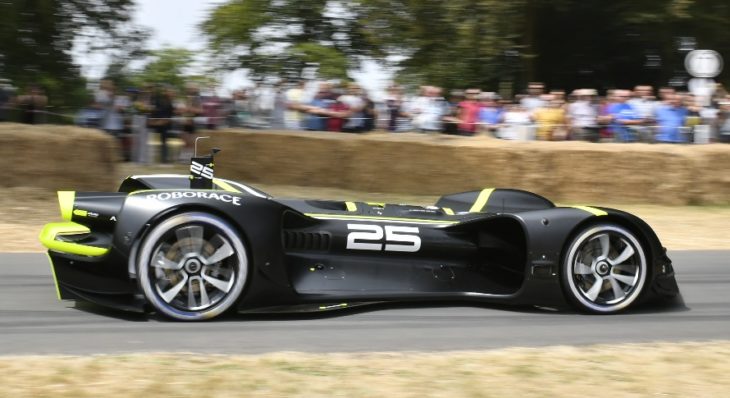 The petrolhead extravaganza that is the Goodwood Festival of Speed witnessed a momentous occasion this year as the first autonomous run of the estate’s famous hillclimb course was completed by Roborace’s Robocar. The aptly named machine navigated the 1.16 mile course using artificial intelligence.

As pointless as it may seem to driving enthusiasts and particularly racing where it is the skill of the driver that matters, the autonomous run by Robocar was a watershed moment. It is not so much the fact that a driverless car completed a course. Other cars have done that, and on more challenging routes. It is the fact that a festival like Goodwood, which celebrates mostly the good old days of automobile, has accepted such a thing in its midst.

The Roborace Robocar, which is of course electric, weighs weighs 1,350 kg and is powered by four 135kW electric motors used to drive each wheel, for a combined 500-plus hp. Weirdly though, it is not the motor that is most impressive part of this machine, but rather NVIDIA DRIVE PX2 processor that enabled it to drive on its own without pre-programming. The car uses a combination of LiDar, radar, GPS, ultrasonic, and camera sensor to find its way and stay on course.

“We are ecstatic that the team have been able to achieve this landmark run and we hope that it draws attention to the amazing advances that are being made in the automotive industry,” said Rod Chong, Deputy CEO of Roborace. “Robocar is an ambassador for the future technologies we will see on our roads and we hope that inspirational stunts like this will change public perceptions of autonomous vehicles.”