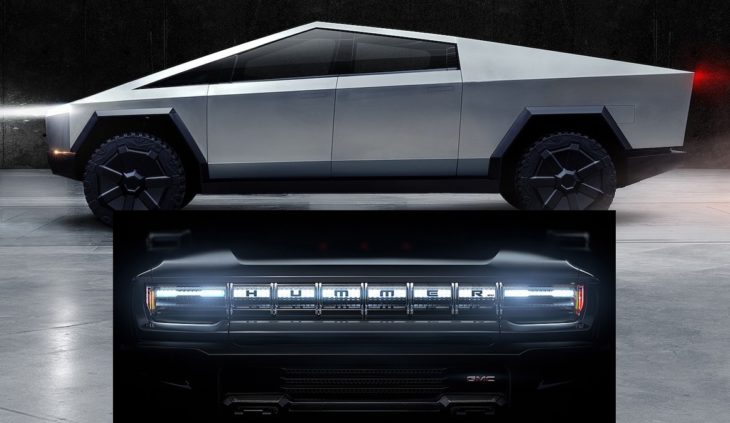 If you asked us – or anyone else in the automotive news sphere, for that matter – even two years ago which segment would be the hottest for electric cars in 2020, probably the only one we wouldn’t mention was pickup trucks. But as it turns out, many car makers are convinced that in order to make it big in the electric market, they need to go big. And what better way to go big than pickup trucks? The thing is though, these new, ultra-modern electric pickups are nothing like their fossil-fuel-guzzling predecessors. They are a world apart. In this article we will look at two of the hottest electric trucks set to come out over the next few years and try to determine which one does the whole “truck of the future” thing better. This is Tesla Cybertruck vs GMC Hummer EV.

Now, the paragraph above might imply that these slick new trucks are more gimmicky toys than utilitarian vehicles. In other words, they are just marketing stunts, and that the job hauling stuff will still be delegated to the old-fashioned, real trucks. That is not so. The Cybertruck or the yet-to-be-revealed Hummer EV might be all fancy and sleek and high-tech, but they can hold their own against anything with Ram, Raptor or Sierra badge on it. They come with big beds, and what’s more, because they are equipped with space-age electric motors, they have oodles of torque, which of course means they can carry more, tow more, and generally do more work than their ICE cousins.

With that out of the way, let’s get back to the original topic for this piece, which is which one of these two, Tesla Cybertruck or the Hummer EV, is the right truck for the future. Granted, the Hummer is not even revealed in full yet at the time of this writing in February 2020. However, we do have a fairly good idea what this is thing is going to look like, and judging by the teasers and previews, we also have a decent understanding of its performance. It does, for example, go from 0 to 60 mph in 3 seconds, which is mighty impressive. As for the Cybertruck, we have all seen and heard much about it. It can out-accelerate a Porsche Turbo, tow many times its weight, and go a good few miles before running out of juice. And all of that is down to the magic of electric motor’s instant torque and some big-ass batteries.

That’s all well and good. What those specs mean is, there is nothing really in it between these two in terms of raw performance and capabilities. We reckon the criteria for judging which truck is more future-proof really comes down to looks and interior tech. That is pretty much what it has come down to, not just with trucks, but all the other categories of modern cars. It is about how outlandish you can make the vehicle look while remaining within the boundaries of State regulations, and how much tech stuff (read interactive screens) can you cram inside the dashboard. And what usually gets sacrificed in the quest to make the car more geek-friendly is taste. I think we can safely say that neither the Cyberthingy nor the pansy Hummer are tasteful cars. But that is beside the point. What matters is if Gen-Z, or whatever they’re identifying as these days, approve of them.

And in that sense, it is fairly obvious, Tesla Cybertruck has the edge over the more “ordinary” looking Hummer EV by GMC. One would imagine that the inspiration for the design of this truck was the new-fangled ideas about non-binary genders and all that. What we mean is, the public perception appears to be that the more “extraordinary” you are these days, the cooler you are. So Tesla just went mad and came up with the pickup truck equivalent of Caitlyn Jenner. So it might seem that the Hummer EV – cool and steampunk-y though it sure is – has no chance. If we were to put money on it though, we’d bet on the GMC. You see, the Cybertruck is such a niche thing, only a few Youtubers are going to buy it in order to feature it on their channels. The more “regular” customers, shall we say, will go for the less alien Hummer. So if you gauge the success of a model by how many it sells, like a rational person should, we’d say GMC Hummer EV takes the cake here.