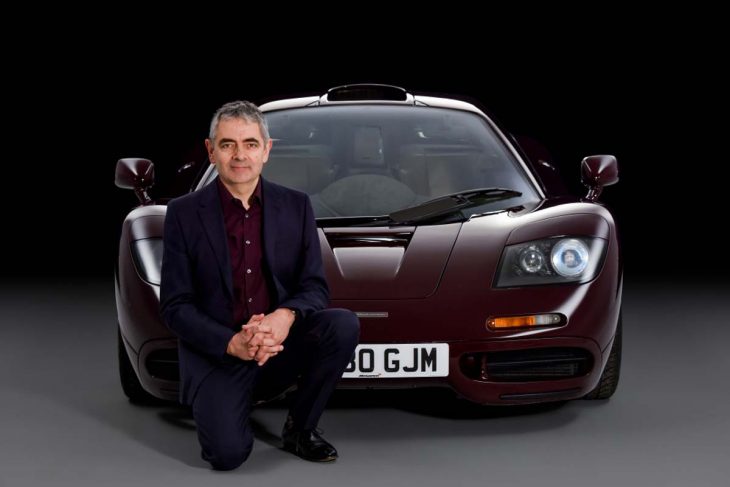 Nobody’s quite sure why so many comedians are so into cars. The best explanation we’ve heard so far is Spike Feresten’s reasoning that comedians are fun experts, and cars are so damn fun! So it follows that these fun gurus are naturally drawn to fun machines. Having said that, there are also quite a few comedy heavyweights who loath cars. But let’s not get bugged down in that. In this article we will look at some of the most expensive cars comedians own.

As always with such list, the best bet would have Jay Leno at the very top. But this has become such a cliche, we’re not going to start with him.  It wouldn’t be fair to the others, either. So let’s begin with:

The venerable creator of Mr. Bean and Johnny English is one of the OGs of this niche. He has owned many a unique cars over the years, some known to the general public, some not. But the pièce de résistance remains the purple McLaren F1. You have seen this car on television on many different occasions, perhaps the most famous one being on Top Gear where Richard Hammond raced it against a Bugatti Veyron. But that is not the coolest thing about this machine. That would be the fact that Rowan once crashed this car. It’s cool, because it shows he drives this car the way it’s meant to, rather than keeping it locked away in a secure garage.

We gave second position to Seinfeld over Jay Leno simply because Jerry’s attitude towards cars is more fun-centric than Jay. With Leno it’s all about the pedigree and originality and value and engineering and… which sometimes can make him a bit of a bore. But Jerry, he buys cars just to have fun with. He once summarized his love of cars in these simple terms: I just love driving. I love that when I turn this big round thing in front of me, the car turns. That is fascinating to me. As for our pick for Seinfeld’s expensive car has to be his 1955 Porsche RS Spyder. Granted, it was sold for $5.3 million, but you can’t hold it against Jerry The RS Spyder is the Porsche that killed James Dean.

Okay, it’s time to bring in the big dog. Leno’s love of cars verges on obsessive. He loves his cars like a normal guy loves his children. That is why he himself couldn’t pick which one he loves best out of his $50+ million collection. Going by price alone, Leno’s super special McLaren F1 would take the candy as it is estimated to worth $10+ million. But if you take the cool factor into account, it has got to be his vintage Bugattis. Each one of these gems may be worth a measly 4 or 5 million dollars, but the fact that they are super original and super rare, make them a true Ultra.

The Nutty Professor is another comedic genius with a passion for cars. But not any cars, mind you. Eddie has a penchant for super deluxe, as evidenced from his love of Rolls-Royces and Aston Martins. More recently he’s been in a Mercedes phase, going through stuff like the SLS Gullwing and the AMG GT. But his most prized possessions still remain the Rollers, with the Phantom for when he likes to be driven around, and the Drophead Coupe for when he fancies driving himself.

Just like Eddie, Kevin Hart loves modern luxury cars. He also is a huge of fan of customizing his high-end cars. What’s most intriguing about his collection is the diversity, with everything from Ferraris and Aston Martins, to muscle cars, and even a couple of run-of-the-mill SUVs – albeit heavily customized ones. The pick of the bunch for Kevin has to be his tricked-out Mercedes G65 AMG, simply because of the contrast his size makes with this humongous truck!