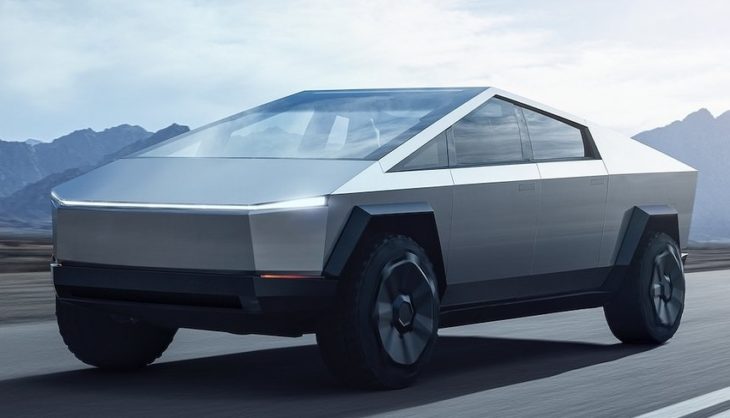 As I am sure you know, the past few days after the 2019 Los Angeles Auto Show the automotive blogsphere has been abuzz with opinions about Tesla’s new pickup truck, the so-called Cybertruck. That’s fair enough, considering how groundbreaking, and how amazingly odd this thing is. We reckon people are going to be talking about this creation long after it’s released in the market. So let’s have a closer look at this “truck of the cyber age.”

It appears Tesla arranged everything surrounding the launch of the Cybertruck for maximum dramatic effect. Nobody outside Tesla’s inner circle really knew for sure they were going to drop this bomb at the L.A. Autoshow. The surprise debut was commensurate with the nature of the vehicle unveiled, as it was something nobody had ever seen or even imagined. Well, that’s not quite right, is it? I’m fairly certain some of us drew something similar to the Cybertruck on the back of our math books when we were kids.

Than again, it seems the overly simple design of the Cybertruck has been carefully crafted to go with the whole drama thing. Surely, it would not generate so much debate, were the design of the truck on par with stuff like the F-150 or Silverado or Ram trucks – you know, the usual suspects. Elon Musk clearly wanted his take on pickup truck to be different, and like everything he does, he took it to the extreme.

And the thing about simplicity is, it makes a lot of sense. Granted, the Cybertruck is not beautiful in the conventional way, but the odd looks has not taken anything away from it in terms of practicality and functionality. If anything, the shape has given the truck some advantage vis-a-vis trucking features. The Cybertruck boasts a payload of up to 3,500 lbs and it has a towing capability of more than 14,000 lbs. And then there is the fact that it’s fully electric, meaning it has a large front trunk in addition to the bed, or Vault as Tesla calls it. So in terms of load capacity and storage space, the CYBRTRK is up there with the best of the class.

Where the Cybertruck leaves the competition in its dust, almost literally, is performance. Whereas the most serious performance truck out there would struggle to get you from 0 to 60 in around five seconds, you can get that kind of acceleration from the entry level 39 grand Cybertruck. The range-topping 70 grand version does that in a scarcely believable 2.9 seconds. That is insane for the vehicle that has the aerodynamic properties of a small cottage. Still, Tesla promises a range of 500+ miles for this thing, probably due to the fact that they had plenty of space to pack plenty of batteries in it.

Now, any one of the features mentioned above would have been enough to set this truck apart from everything else in the market today. But you know Tesla. They always have to go a step further. So besides all that, they’ve given the Cybertruck up to six full-size seats inside, a 17-inch display, air suspension, and oh, did we mention the body is made of “Ultra-Hard 30X Cold-Rolled” stainless steel? So yeah, it is also rugged in the truest sense of the word. They have also reinforced the glass for some reason.

So back to the original question, is Tesla Cybertruck ridiculous or ingenius? Well, inspecting the vehicle superficially, it appears to be the ridiculous fantasy of a mad billionaire who doesn’t know what else to do with this time and money. But go through the specs, checkout the public’s reaction to it, and consider carefully how it makes you feel like a kid again, and you have to admit, the Cybertruck is a stroke of genius.