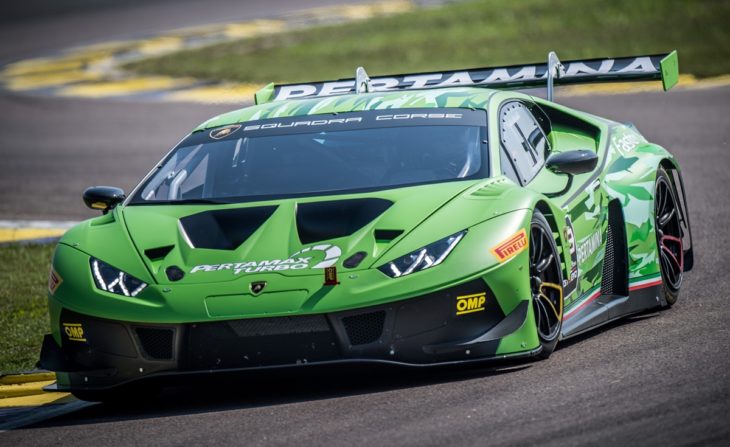 As one of the best looking on the GT grid, or any grid for that matter, the Huracan GT3 is a popular race car. Now teams can have a new version of this beast with not just good looks, but enhanced performance as well. The 2019 Lamborghini Huracan GT3 EVO comes with aerodynamics and performance upgrades.

That is, of course, not to say that the previous Huracan GT3 had performance issues. But you know, when you put EVO at the end of anything’s name, that means the thing is better at its intended role. So the new Lamborghini Huracan GT3 EVO is faster, sharper and easier to live with than its predecessor. That last part is what Lambo is particularly proud of. They have given the EVO a redesigned roll cage that facilitates access to the roof hatch and offers optimum comfort even for taller drivers.

As for the more technical upgrades, Lamborghini Huracan GT3 EVO boasts uprated suspension with new hubs, bearings and axle shafts. The Öhlins shock absorbers have also been changed to become four way. what’s more, the EVO borrows the Electro Hydraulic Power Steering (EHPS) from SuperTrofeo Huracan. It even gets a new M5 ABS system from Bosch. These are complemented with tweaked aero featuring modified splitter and diffuser as well revised bumpers.

The new Huracan GT3 EVO was presented at the Nurburgring round of the Lamborghini Super Trofeo Europe. The car’s official track debut is scheduled for 24 hours of Daytona 2019.

Giorgio Sanna, Head of Lamborghini Motorsport, commented: “The new Huracán GT3 EVO is the result of experience gained over the last three years of racing on circuits worldwide. The main objective during development was to improve drivability, making the car easier and more predictable for gentleman drivers, with low management costs for the teams. For teams that have invested in Lamborghini in the GT competitions of the past, we offer the opportunity to update the current Huracán GT3s with an EVO kit homologated for the next three years of races. As always, they can make use of our technical support and spare parts services on the track in national and international championships.”