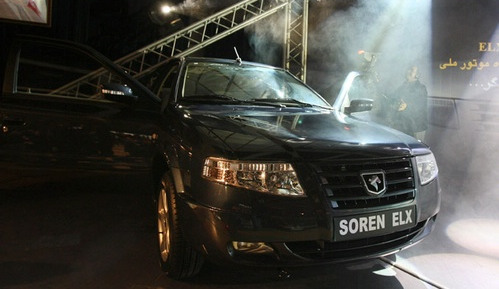 Iran Khodro, the  largest auto maker in middle east, claims that they’ve made the world’s most powerful natural gas engine. The turbo-charged four cylinder runs on CNG (Compressed Natural Gas) and develops 150 hp, but no more details about it has been published! The unit is more powerful than the Japanese samples like the Civic GX, but in early 2007 Mercedes released a version of its Sprinter van with a 156 hp NG powerplant, which is more! So we don’t know about this thing being the most powerful.

The engine will debut in Iran’s first national car Samand Soren ELX, pictured above, which remind us of old Skodas. According to a wise man, if this is Iran’s idea of technology the world shouldn’t be worried about their nuke programs!

Iran Khodro is mostly known for its relationships with Peugeot as they make numerous models from the French firm in Iran under license. The Peugeot 206 Sedan known as SD was also a project started and completed by Iran Khodro. They’ve also done a facelift on Peugeot 405 and make it as a domestic model known as Pars. The 405 itself is still being made in Iran!!