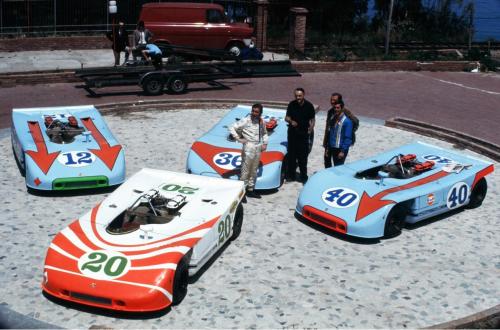 Goodwood Festival of Speed is probably the best car show in the whole world because it’s all about supercars and sportscars, with not much of “green motoring” nonsense involved! Every manufacturer turns up with the very best of their high performance productions, but Porsche decided to also mix it up with some of their classic racers.

They will be presenting the victorious sports cars from the Targa Florio road race in Sicily, as well as the Porsche 917 to celebrate a significant Porsche motorsport anniversary – 40 years since the 1970 win at Le Mans. The rare 804 Grand Prix car from 1962 will also be demonstrated, as part of commemorations of 60 years of the F1 World Championship.

Their lineup of modern cars includes the all-new 620 hp Porsche 997 GT2RS which will make its debut at the Goodwood festival, as well as the new 911 GT3 RS, which at 450 hp is not as monstrous as the GT2 RS, but still pretty quick. They will also bring along the complete range of the new Cayenne, including the hybrid version. The visitors will get special demonstration of the car’s abilities on a specially designed dynamics course laid out in the Porsche Driving Experience area at Goodwood by Porsche professional drivers.

Porsche successes at Le Mans, the Targa Florio and in Formula One celebrated

With an unbeaten record of 16 victories in the Le Mans 24 Hours race, the reputation of Porsche has been founded on success in the demanding high pressure, high speed motor sport environment.

The iconic Porsche 917 scored the first Le Mans win for the marque in 1970, and this year Porsche celebrates the 40th anniversary of this achievement by demonstrating the number 23 winner at Goodwood.

The Sixties and Seventies was a golden age for sports car endurance racing, and Porsche drivers climbed the top step of the podium at many venues. With more than 6,000 curves and countless climbs, the 720 kilometre Targa Florio course in Sicilian Madonie was one of the greatest challenges in international motor sport for many decades. To commemorate the feats of the cars and drivers in the renowned ‘Targa’, the Porsche Museum is bringing to Goodwood the 908/02 Spyder that won the race in 1969 together with the 908/03 Spyder that was victorious in 1970.

Although indelibly associated with sports car racing, Porsche has enjoyed success at the very pinnacle of motorsport in Formula 1. The peak of this involvement was undoubtedly a hat trick of World Championship victories between 1984 – 1986, achieved with the 1.5-litre 900 hp TAG Turbo engine designed by Porsche. However, in 1961 the Stuttgart marque entered its own chassis in Formula 1, and for the 1962 season the company developed the 804 – powered by a flat eight cylinder 1.5-litre 180 hp engine. Driven by the American driver Dan Gurney, the 804 scored its first victory at the 1962 French GP and quickly followed this with another triumph at the Solitude track in Germany.