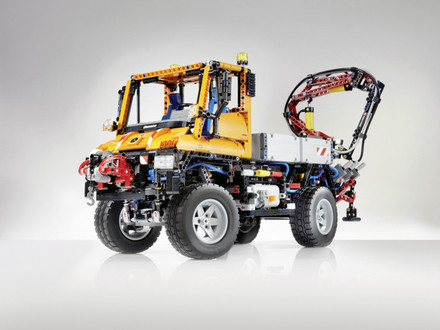 In their first ever cooperation Mercedes Benz and LEGO created this awesome Unimog, celebrating its 60th anniversary.

This is a Unimog U 400 (1:12,5) DIY model that is currently the biggest and most complex Technic model in LEGO’s history featuring 2048 modules. The LEGO Technic Unimog U 400 will be available from August for about 190 Euros. That’s expensive for a toy, but then the attention to details in this thing is just mind-boggling!

The impressive vehicle which links a combination of electric drive and pneumatics has been produced in exlusive cooperation with Mercedes-Benz as a true adaptation of the original down to the smallest details. As the world ‘ s most versatile workhorse, the Unimog pushes snow away in winter, mows motorway embankments in summer or helps to construct new roads. The so-called ” Power Functions ” run the pump of a pneumatically operated crane with a gripper arm that can rotate almost 360 degrees. With its gripper and the front winch, the Unimog can move any load out of the way. In addition it also has a serviceable control system and an engine which is accurate in every detail right down to the pistons. The gear unit provides good ground clearance just like the portal axles in the orginal, an individual suspension deadens jolts and the four-wheel drive guarantees mobility off-road as well. For winter use, the crane and winch can be converted into a huge snow plough. 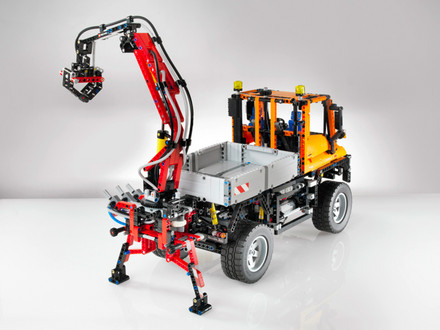