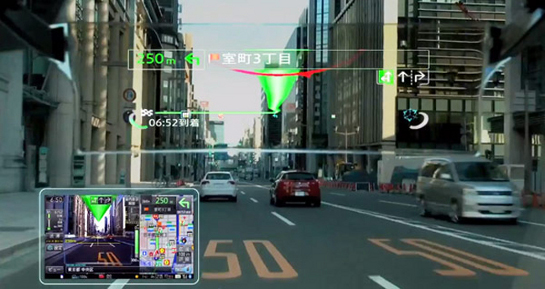 Pioneer is using a new system developed by Microvision, the HUD (Head Up Display), in its new in-car GPS solution, the CyberNavi. The company expects to deliver the first units based on that technology later this year.

Everything works as a complex system of augmented reality applied to a GPS, the device sends the navigation instructions directly to the windshield of the car, giving the driver all the necessary instructions, basically something similar to what GPS navigators do today. Unlike most existing head up displays that generate images through LCDs, Microvision developed a technology that uses 3 lasers and a one millimeter-wide silicon mirror that will tilt on two axes, vertically and horizontally. The three lasers (Blue, red and green), when combined together create the final pixel color that will be shown on the car window.

The CyberNavi “plots” information and images (most like a video game) on the windshield in an area of 90 x 30 cm with a resolution of 720 x 260 pixels. The system can provide real-time information on traffic and can be connected to Apple devices, DVD’s, Cameras, etc. It’s expected that sales begin in Japan next month, and it is believed that it won’t take much longer for the system to reach other parts of the World.

Other companies are also planning to launch products based on this technology until 2016; however, there’s still no information on the devices or the car models that might use the system.