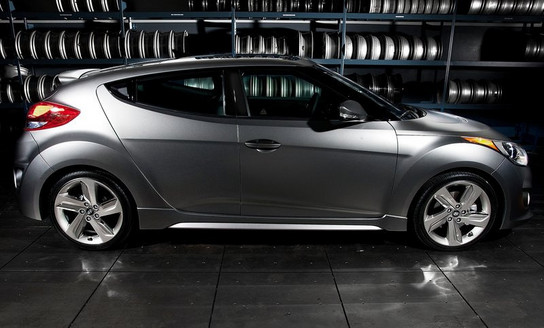 If you were planning on buying the new Hyundai Veloster Turbo thinking this is going to be the hottest compact car they will offer for a while, you might want to hold on for a bit. The Velos Turbo is yet to get its feet grounded in the market, but already reports emerge that Hyundai is working on an even hotter R-Spec version.

Turns out the 201 horsepower the standard car offers might not cut it in the world of Mazdaspeed3 and Focus RS.

Hyundai is yet to confirm this, but if they make such a car – and they probably will – it will have revised suspension to make it sportier than the Turbo – which uses the same basic suspension as the normal Veloster but with 18-inch wheels – with a fully independent setup at the back and lowered ride height.

The R-Spec Turbo will also get more power, hopefully, from the same 1.6 liter turbo unit. It will get a revised ECU software, intake and exhausts. We would love to see the Genesis Coupe’s 274-hp 2.0 liter turbo engine in the Veloster, but that won’t be cost-effective for Hyundai to make. They leave the job of swapping the engine to tuners and enthusiasts.

Again, these are all speculations based on reports coming out of Hyundai’s headquarters. We’ll keep you posted as the story develops.