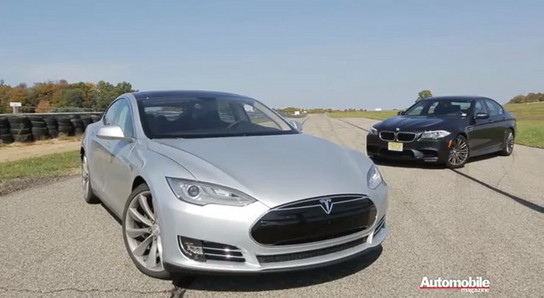 The internet loves debate and controversy, and this video right here will sure give it a healthy dose of that. It’s a drag battle, courtesy of Automobile Magazine, between the Tesla Model S electric car and the highly glorified BMW M5 F10. In this test the Tesla wins fair and square. It beats the angry, growling 560 horsepower super sedan without making any noise, or emissions, at all. The result has sparked a bit of fury among YouTube residents.

The M5 of course has a very large fan base, and they sure don’t like to see the Bavarian hero getting mocked by an electric car out of Silicon Valley. On paper the BMW should be about 0.2 of a second faster than the Tesla. But you can’t argue with that enormous torque Tesla’s electric motors make. What’s more, electric motors are less sensitive to the conditions – elevation, humidity, etc – than petrol engines.

We guess what matters most is the fact that the automotive industry has arrived at a point where they can make a zero-emission car as fast as a 560-hp gas guzzler. That is something to celebrate.