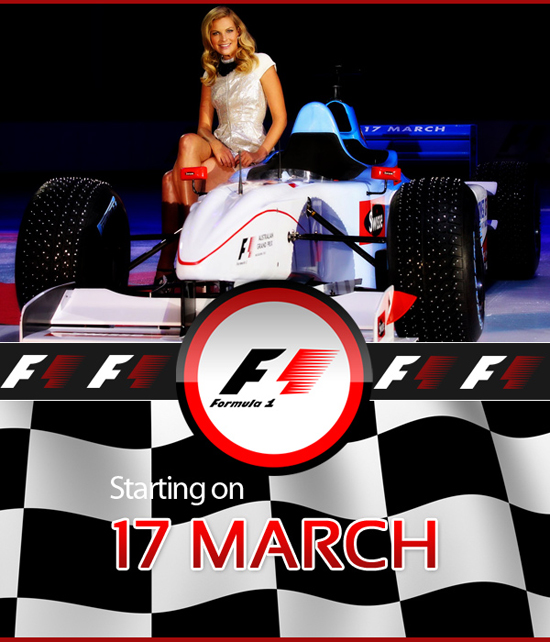 The buzz in the pit-lanes at the moment is the title race is just too hard to call; after the 2012 season, Red Bull, McLaren-Mercedes and Ferrari finished with their fair share of constructor points. The Lotus team surprised everyone with great pace, finishing 4th with Kimi Raikkonen also finishing 4th in the drivers’ championship. Ferrari’s Fernando Alonso led for most of the season until Red Bull found momentum and Sebastian Vettel’s skill and determination finally crowned him World Champion. In the McLaren-Mercedes camp, Lewis Hamilton and Jenson Button battled it out and swapped places in the diver standings, Lewis finishing just two points ahead after the final race, although Hamilton has made a bold move to the Mercedes team for 2013. 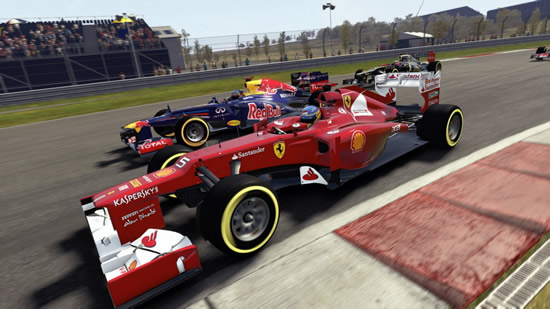 So with all the upgrades and confident press releases, plus the regulations haven’t been drastically changed, it really is too hard to call. The only way of knowing their true pace will be on the final session of qualifying. With only a few days left until the pit-lane light turns green and the cars head out to show what they can do, here’s what the top teams have done to get them there.

The 2013 season will see Red Bull’s RB9 car fighting for a 4th consecutive constructors’ championship, whilst Vettel will be aiming for the same in the divers’ championship. The RB9 was unveiled on the 3rd of February at Red Bull’s headquarters in Milton Keynes. Now teamed with Japanese luxury auto brand Infiniti, the RB9 loses its side pod’s Red Bull decal and is replaced with an Infiniti badge placed on a purple background. The RB9 retains its slim nose, important for over all down force provided by the front wing. The leading edges of the sidepods are also slim and narrow, but this works well with the revised body shape that appears shorter than the RB8’s. This is to create a better airflow through the rear to increase downforce. 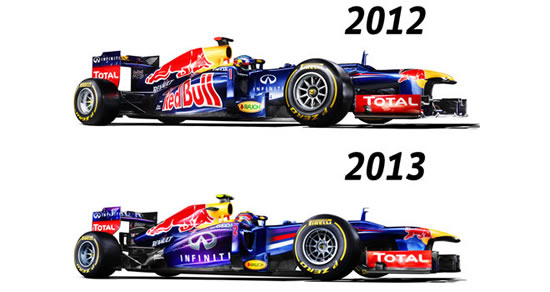 Overall, the RB9 doesn’t look a lot different than its predecessor apart from the striking purple sidepods and stripes on the nose. The saying “If it isn’t broken, don’t fix it”, springs to mind, but how much revision have the other teams done to close the gap?

So how do the drivers feel about RB9?

Vettel and Webber were both happy with testing in Jerez, managing to shake off any rust and achieve a good amount of laps to test reliability. After completing 102 laps and setting the 3rd fastest time, Vettel warned the team against getting too excited about the performance at this stage.

“I think the car’s working very well. Obviously it’s difficult to judge the speed, but it terms of reliability it was good and I feel pretty happy with the car so far,” said Vettel.

“We have got a good car again, we believe. Whether it is enough to challenge for a consistent championship remains to be seen, as there is no one this early in the season who can predict how well their car is going to be going in the middle of the championship.

“So I just need to keep doing what I have been doing, with the exception being the end of last year.”

However, in Barcelona, Vettel only managed 12th fastest in testing and admitted he was disappointed. This was due to the Pirelli tyre’s degradation, a problem several other drivers complained about.

When asked if he could explain his problems, Vettel said: “It’s extremely difficult to pinpoint the exact areas because the tyres were not consistent enough.

“If you sum up the whole three tests, we were all limited to what the tyres could do.

“It was extremely difficult to read some set-up changes and find a good direction with the car because the tyres were simply not good enough.”

Although Webber set the fastest lap on the 2nd Barcelona test in the rain, he eventually experienced the same problems as Vettel on the final day and finished 14th fastest.

Considering Ferrari performed poorly at the beginning of the 2012 season, languishing a whole 2 seconds off the pace at times, Alonso’s will to never give in saw him lead the championship throughout most of the season. Fighting Ferrari’s corner in 2013 is their F138, the ‘138’ a combination of the current year and the amount of cylinders used, a celebration of the final season using V8 engines. 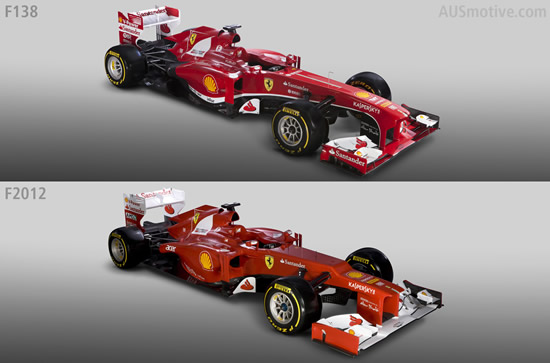 Thankfully the F138 sees an end to the previous ugly stepped nose, replacing it a “vanity panel” to help aerodynamics. The biggest revision is at the rear of the car, which is narrower and more tapered. From a passing glance not a lot has changed apart from the nose, although Ferrari will be testing in the wind tunnel right up until the last minute. Although the rest up the car looks unchanged, all the parts have been revised to maximize performance whilst maintaining their great reliability.

So how do the drivers feel about the F138?

Filipe Massa seemed happy with his Ferrari in Jerez, setting the fastest time by nearly a full second on the third day.

On the final day of the first pre-season testing, Alonso set the quickest time even though he said they weren’t happy with the car a day earlier.

After leading the field all day, he said: “Overall, it has been a positive four days for us and understanding the car. But obviously, with a completely new concept and a completely new design, there is a lot of room for improvement for us and that’s what we need to focus on in the next couple of tests.”

When it came to testing in Barcelona spirits were high as the F138 still performed and consistently posted competitive times. Alonso finished 2nd with his combined laps and Massa managed 4th – very encouraging heading into the first round at Melbourne.

An upbeat Massa said: “The car behaved well at all times, regardless of track conditions, and I am delighted because, in spite of the excessive tire wear, it was interesting to understand the behaviour of the F138.”

Alonso also said Ferrari are 200% stronger than this time last year. So if Ferrari head into the championship uncharacteristically strong, can anyone stop Alonso from lifting the trophy?

2012 didn’t go to plan for the Silver Arrows. Whilst both Lewis Hamilton and Jenson Button notched up wins, they were pretty much on par with each other, simultaneously taking points away from each other. McLaren’s pace wasn’t always there either, and Hamilton suffered a huge 6 DNFs, so reliability really needs to be addressed without compromising the performance.

Hamilton has moved to the Mercedes team, who throughout testing have shown great pace, although it was Nico Rosberg topping the time sheets. Taking Hamilton’s place is former Sauber driver Sergio Perez. 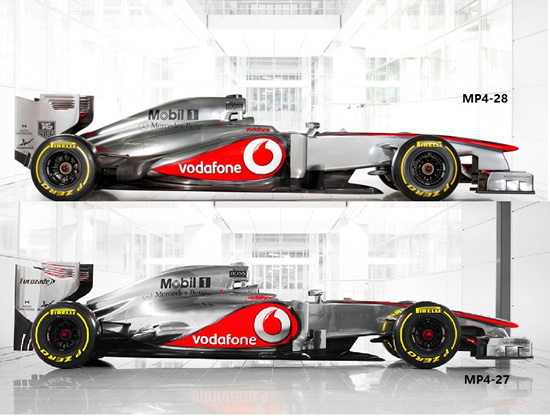 McLaren’s 2013 entry is the MP4-28, a car Button claims they are still trying to understand. Like other cars in the pit lane, the MP4-28 doesn’t look a lot different from its predecessor. The sidepods have been revised to improve airflow over the rear of the car, and the suspension setup has been totally reconfigured to be more aerodynamic. The engine cover and rollhoop have been made lighter to alter the car’s centre of gravity, allowing the team to raise the new sleeker nose.

The team have spent time a great deal of time on the engine, ensuring maximum performance and reliability. Tem principal Martin Whitmarsh has great faith in the new car: “This car is already quicker than the car that finished the end of last year.”

So how do the drivers feel about the MP4-28?

Although Jenson Button missed 5 hours’ testing on day one at Perez because of a fuel-pump problem, he eventually stormed to the top of the time sheets. On day two, teammate Perez managed a respectable 7th place, showing promising signs of settling into his new team.

Button had this to say: “When I drove out of the garage I immediately felt comfortable in the car and very much at home.”

In Barcelona Perez started to shine, topping the time sheets on day two, although his combined overall time knocked him to 15th. Button set a good pace and managed 5th fastest, and despite his smooth driving style, he commented on the severe tyre degradation. “You have to throw a lot of new tyres at it and we don’t have that many,” say Button. “So it’s difficult to do set-up work and comparisons.”

Can McLaren overcome their 2012 gremlins and keep a reliable car on track throughout the entire season? How will Sergio Perez perform compared to Button in Melbourne?

It seems the key to success in 2013 will be who can understand the Pirelli tyres and adapt the quickest. The leading teams have all shared the top spot in testing, but testing can’t be taken too seriously, just as practise times don’t really count. The only way of knowing who’s hard work has paid off will be qualifying on Saturday 16th. 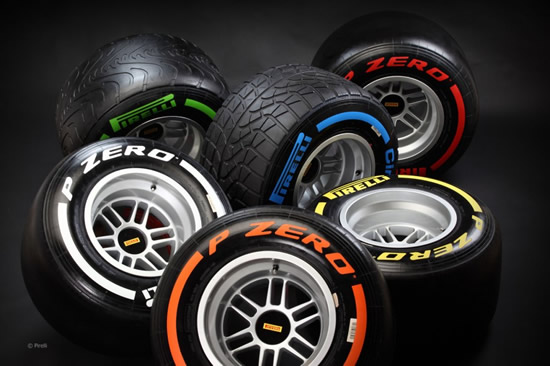 2013 will be one of the closest and most exciting seasons yet, with 5 world champions all chomping at the bit to make it into 2013’s first corner ahead of the pack. Drivers to definitely look out for are Lotus’ Kimi Raikkonen and Mercedes’ Nico Rosberg.