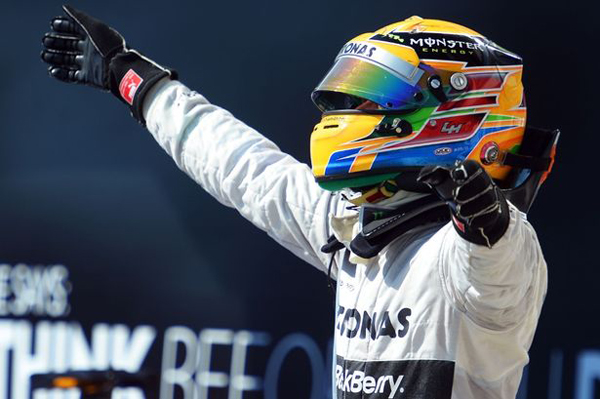 Hungary was the final race before the summer break. Alonso feared dropping back further in championship, and everyone was wondering how the Pirellis were going to perform. And would Sebastian Vettel maintain his dominance at Hungary and leave the other teams with much work to be done over the summer break?

In Friday practise, Vettel was quickest in both sessions ahead of teammate Mark Webber, with a best lap quick enough for last year’s pole.

The qualifying team to beat, Mercedes had to focus on learning everything about the new type of tyre after missing the testing at Silverstone last week because of their Pirelli scandal.

McLaren managed to liven up their garage after their recent poor from as Jenson Button, twice a winner in Hungary, was sixth fastest in the morning whilst his Sergio Perez nabbed ninth. 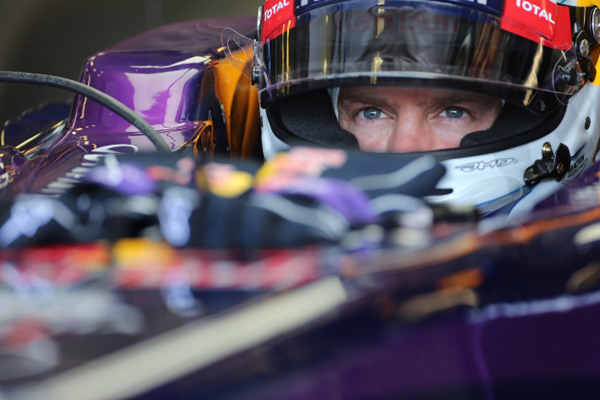 Come qualifying and Lewis Hamilton looked to be the biggest threat for pole. Although it’s no surprise seeing a Mercedes at the forefront of qualifying, Hamilton voiced his concerns about tyre degradation and how they perform in the actual race. The Brit stole pole in dying seconds from Vettel, but he still sounded doubtful about the race, stating they would need a lot of luck to beat Red Bull.

Behind Vettel in P3 came an on form Romain Grosjean who out qualified his Lotus F1 teammate Kimi Raikkonen, who started in P6. 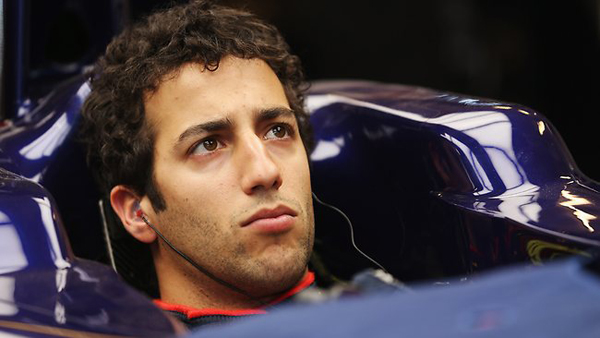 Vettel was considered the favourite to win the race as he was to start from P2 and Mercedes are renowned to struggle on race day with their tyres.

The start of the Hungarian Grand Prix was by far the most exciting of the season, with so much action it was to keep track of what was going on. 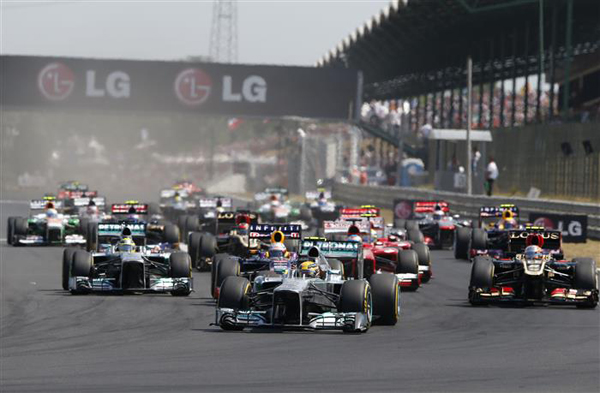 Lewis Hamilton made a great start as Sebastian Vettel got bogged down on the dirty side of the track. Vettel had to move right to defend off Lotus’ Romain Grosjean and ended up pushing him close to the grass. An ambitious Nico Rosberg saw this as and opportunity to nab third, but it didn’t come off. After the cars had finished battling for places, Vettel maintained second, and Hamilton in clear air created a gap back to the German. It was a miracle all cars made it through turn one with no incidents.

Further into the lap and Rosberg ran wide, kicked up dirt and rejoined the track, turning in on Filipe Massa – Rosberg reported wheel trouble whilst Massa took on some front-end damage. 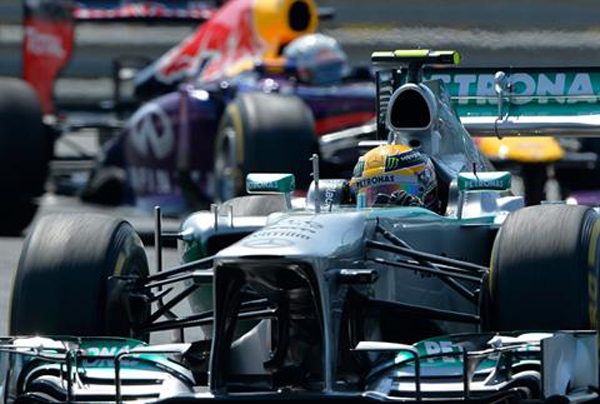 After the first round of pit stops, Vettel’s battle to catch Hamilton was compromised when he had to endure 12 laps stuck in the dirty air behind the McLaren of Jenson Button – Button had yet to stop and ran on medium compound Pirellis.

Knowing Hamilton was romping away at the front, Vettel took a frustrated and desperate stab at Button, clipping his front wing against the McLaren’s rear tyre. After this contact the German’s performance stabilised, and once past Button, he unleashed his RB9’s power, taking half a second a lap out of Hamilton. 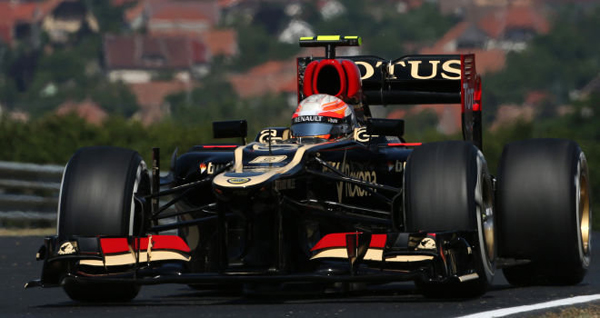 On lap 29 Grosjean set the fastest lap, which saw him easily latch onto the back of Massa’s Ferrari. With so much more grip, the Frenchman made a brave move around Massa on the outside of turn four. However, a few laps on the stewards investigated the move on Massa, as he crossed the white line on the exit while trying to execute the move – this results in a drive through penalty. The bad luck didn’t end there for Grosjean, as the previous incident with Jenson Button, when the two made contact on the entry to turn six, will be investigated at the end of the race. 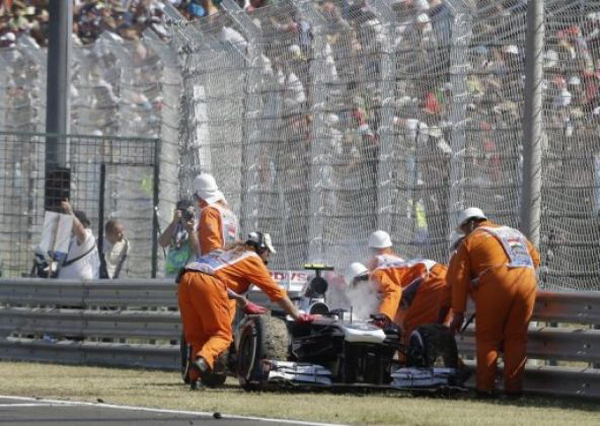 The safety car put in an appearance on lap 45 after Valtteri Bottas pulled over his smoking Williams.

Vettel then set the fastest lap to reduce the gap to Raikkonen to just two seconds. Meanwhile, Hamilton continued to lead with a 3.2 second advantage over Mark Webber, who still had to pit.

Mark Webber on his new soft tyres started pulling off some very quick lap times, but it was doubtful if he enough laps left to catch his Vettel – the gap was nine seconds with eight laps remaining.

Despite his best efforts, Vettel dropped back from Raikkonen as the pair encountered traffic. This gave Raikkonen some much-needed breathing space and out of the DRS zone. 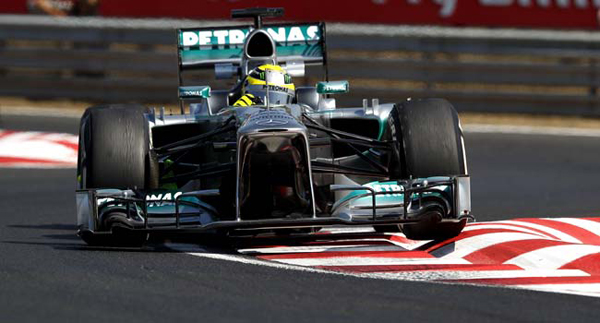 Disaster for Rosberg as his Mercedes’ engine let go at turn two. The German peeled off the track and into retirement from ninth place. 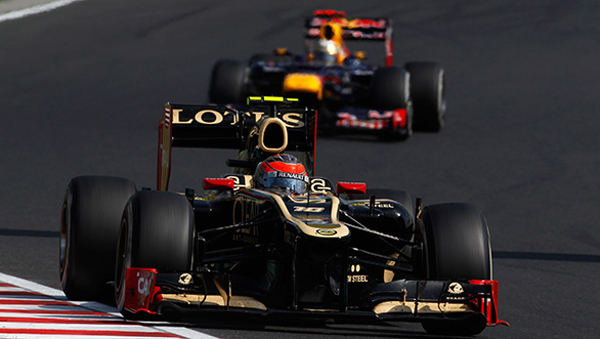 With two laps to go, Vettel tried a last move around the outside of Kimi at turn three, but the Finn wasn’t having any of it and he maintained the racing line, squeezing Vettel wide. An angry Vettel came straight on the radio with: “He didn’t give me enough room.” 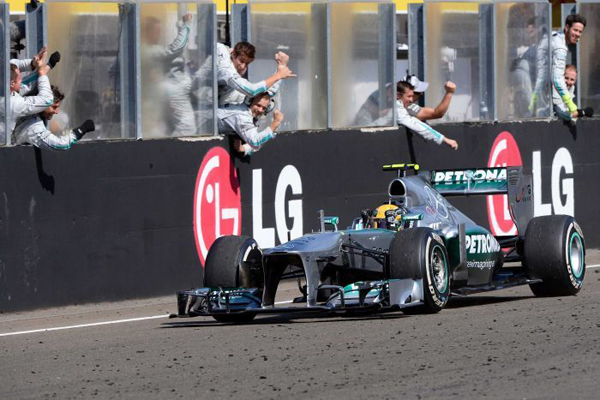 Lewis Hamilton comfortably took the chequered flag and his first win of the season – his relief must be great as his teammate Rosberg has already notched up two wins this season.