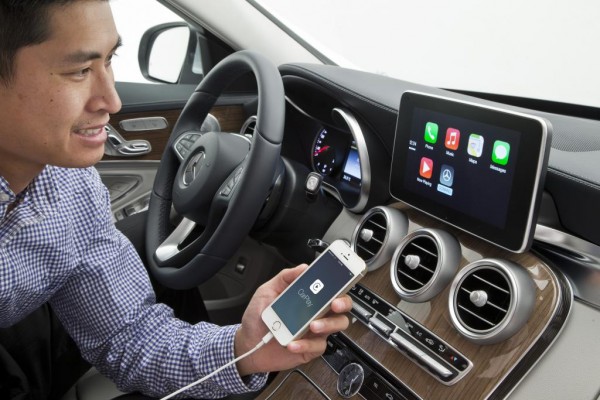 It was almost a given that the two technology giants, Apple and Google, would come up with their very own in-car infotainment systems. It’s a lucrative market, and they couldn’t just sit back and watch lesser known brands running away with it. Now, Apple beats Google to it, launching their “CarPlay” system at the Geneva Motor Show.

Apple CarPlay Infotainment is featured on a number of models at the Geneva Show, including Ferrari, Volvo and Mercedes. Here’s a brief demo of the system fitted to the new Mercedes C-Class. CarPlay works based on iPhone’s capabilities, which means it enables you to make calls, use maps, listen to music and access messages with just a word or a touch.

Mercedes’ COMAND system is already compatible with most smartphones and offers thorough integration. But as always, the one made by the maker of the smartphone works better and gives you more. As soon as Google brings its own in-car infotainment system to market, Mercedes-Benz customers will also be able to order that one if they prefer the Android experience.