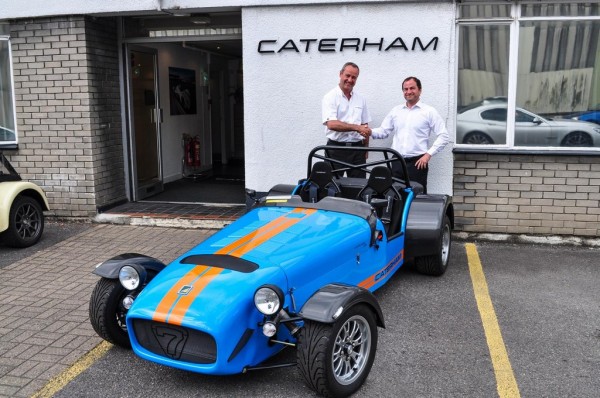 This, ladies and gentlemen, is the Caterham Superlight R500 chassis number 174, and the reason it looks so sad is because it is the last of its breed. After this car rolled off the production line, the troubled British automaker ceased the production of the R500 for good.

We say troubled because over the past few weeks Caterham broke off its partnership with Renault, and sold its entire F1 business. They say all is fine, but if that’s not being troubled, we don’t know what is.

It is indeed a sad occasion to see the Caterham Superlight R500 being consigned to the history books though. You know this car from its phenomenal performance at the Top Gear test rack in the hands of sacked Stig, Ben Collins. The 263bhp sports car set a time of 1:17.9 – nearly half a second faster than the Bugatti Veyron.

The last Caterham Superlight R500 is now on its way to Caterham’s distributor in Peru, South America.

Caterham Group CEO, Graham Macdonald, said: “If Caterham wasn’t already firmly on the map as one of the world’s best-known British sportscar makers, the R500 certainly helped us to cement that position. It was a landmark model for us in many respects; its performance on the road and track was matched by the impact it had on our brand. It brought new technologies to the Seven range and was the first production Caterham to adopt a sequential gearbox.”