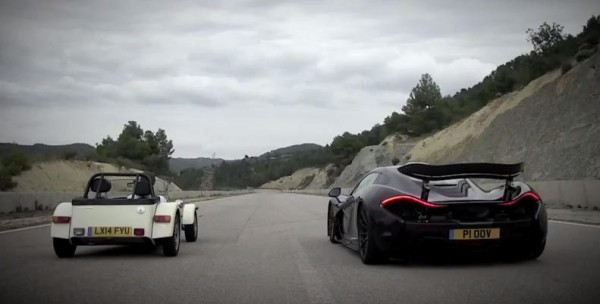 Last month Top Gear Magazine had a Speed Week special for which they’d assembled a huge collection of the world’s fastest machines. One of the outcomes of this event is a series of awesome drag race clips pitting, in true Top Gear fashion, the new hyper cars against the most unlikely rivals.

So after showing us what the Porsche 918 can do to a 911 Turbo, this time they’ve released a video of the McLaren P1 taking on a Caterham 160R. It’s a turkey shoot, obviously, but it gives you an idea how mind-bogglingly fast that P1 really is.

Granted, the 80bhp Caterham 160 is not that fast anyway. But the poor thing weighs something like a third of the McLaren P1, which not only has a twin-turbo V8, it also benefit from an electric motor with instantaneous torque. It might sound like a crazy idea, but we think the Caterham might actually be more fun to drive. For one thing, we can afford it, which is half the fun!