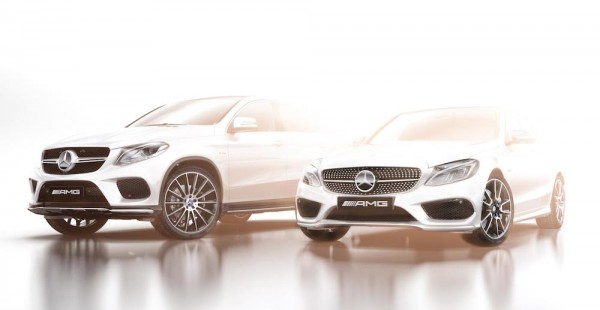 Mercedes-Benz and its in-house tuning arm AMG announced the launch of a new range of customized and accessorized models. To be launched at the 2015 Detroit Auto Show, the new range is called AMG Sport and they offer enhanced performance and technical refinements.

The teaser image AMG has released to announced the new lineup is of particular interest to us, as it appears to reveal the production version of the Mercedes GLE crossover coupe. Well, some of it at least. The GLE is Mercedes’ rival for the BMW X6, and judging y what we can see here, it is well prepared for battle. The other car that will be released at NAIAS along with the GLE marking the launch of AMG Sport series is a version of the C-Class Coupe.

According to Mercedes-Benz, AMG Sport models will fill the gap between the AMG Sports package for Mercedes-Benz vehicles and the classic AMG models, thereby underpinning the brand’s growth strategy on a sustained basis. AMG has ambitious plans for the future, fueled by their success this year in shifting over 40,000 units globally.

“We are proud of these successes, as they provide the basis for the next stage of our growth strategy, which we are now launching,” explains Tobias Moers, Chairman of the Board of Management of Mercedes-AMG GmbH. “In the next three years we aim to more than double our total sales for 2013.”