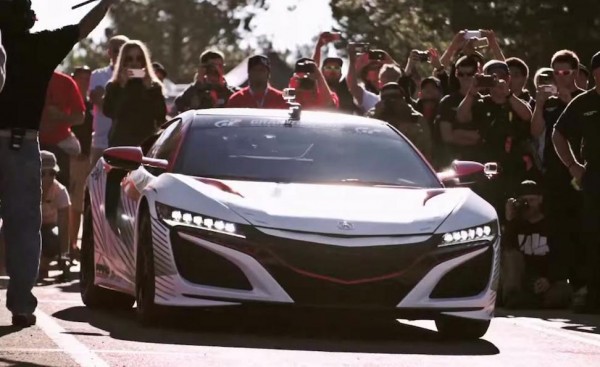 Honda/Acura is gradually kicking up the publicity efforts for the all-new NSX into high gear as we get closer and closer to the car’s launch. The latest outing for the pre-production Acura NSX was a pace car gig at this year’s Pikes Peak hill climb event and here is the car doing its thing.

Now, the footage you are about to see looks like it may have been tinkered with and probably sped up at points. Nevertheless, it offers a good look at the Acura NSX and how agile it is round corners – for a four-wheel-drive hybrid, at least.

The new Acura NSX is a wholly remarkable car. It is said to be as big a leap forward for the industry as Nissan GT-R was when it was first launched. The NSX brings with itself a new level of performance nobody thought was possible in this segment and price bracket. And of course, it is the successor for the legendary first-gen NSX, still one of the greatest cars ever to come out of Japan.

The production Honda/Acura NSX will boast a twin-turbo V6 engine boosted with a couple of electric motors and coupled with the firm’s Super Handling All-Wheel-Drive system.