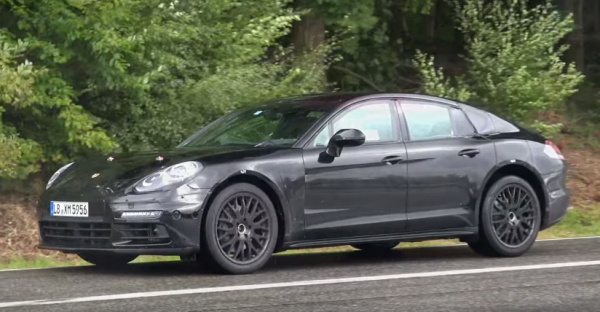 Sometimes it is better for supercar spotters who works at the Nurburgring Nordschleife to leave the track and go outside, because that’s where they can hunt good stuff like this. This 2016 Porsche Panamera Hybrid prototype – S E-Hybrid, to be precise – was caught near the ‘Ring apparently too shy to get in!

This prototype matters for a number of reasons. First of all, obviously, it hits at an upcoming hybrid Panamera which could set new standards in the hybrid luxury segment boasting technology from the 918 Spyder and maybe even the Mission E Concept. What’s more, it gives us some clues as to what changes the next facelift will bring to the big Porsche.

Details of 2016 Porsche Panamera Hybrid powertrain are not known at the moment. But to recap, the last hybrid Panamera featured a petrol electric system which in parallel full hybrid mode chucked out 416 horsepower, enough to take this massive barge of a car from 0 to 100 km/h in 5.5 seconds and on to a top speed of 270 km/h. Despite that, it has an excellent combined fuel consumption of in 3.1 l/100 km and CO2 rating of just 71 g/km.