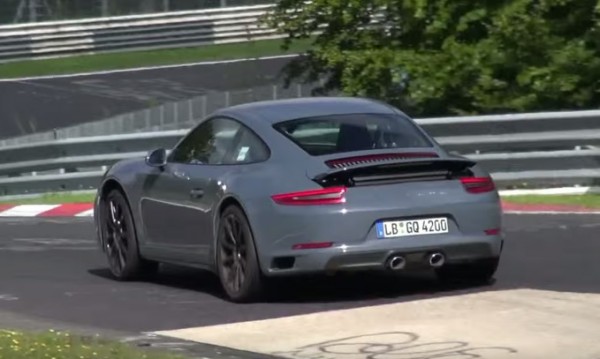 Hot on the heels of its global debut at the Frankfurt Auto Show, the new Porsche 991 Facelift has been spotted flexing muscle at the Nurbrugring. A lot of people have been talking smack about the new rear-end design of the 991 Facelift and, well, this footage is not going to assuage that. What it does though is assure the fans the car is still an out and out sports car with a serious turn of speed.

And come on, the back end of Porsche 991 Facelift does not look that bad, especially when the rear spoiler is extended:

The latest Carrera has undergone some pretty major changes, chief among which is the use of turbochargers for the first time in a non Turbo model. The flat-six engine in both Carrera and Carrera S now feature two small turbos which help them make more power while burning less fuel. The base model gets 370 hp (272 kW) out of this deal while the Carrera S models run away with 420 hp (309 kW). There is also a new  specific exhaust system which, judging by this footage, sounds sportier than before, albeit less 911-ish.