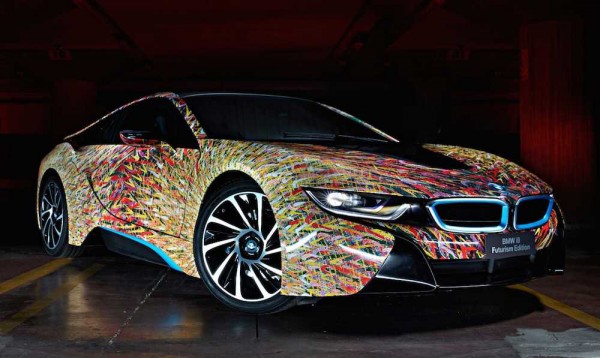 In a joint effort BMW Italy and Garage Italia Customs have come up with a one-off, artsy version of the i8 hybrid sports car to mark the 50 years of BMW history in Italy. The one-off is called BMW i8 Futurism Edition and it’s a lot more than just a showpiece.

Boasting a wrap inspired by Giacomo Balla’s “Lampada ad Arco” painting, BMW i8 Futurism Edition will enter the Mille Miglia 2016 where it will represent the German brand in Italy along with a 328i driven by Sergio Solero, President and CEO of BMW Italy. As for why it’s called “Futurism,” that has to do with the design of the wrap which “represents a street lamp powered by electricity under moonlight.” That works, what with the i8 being in essence an electric car… at least some of the time.

“There was immediate synergy with BMW Italia” stated Lapo Elkann, President and Founder of Garage Italia Customs “the very first time we met for the i8 Futurism Edition project. Garage Italia Customs and the BMW brand both share, in fact, all the values connected to technology evolution and the continuous search for innovation in their specific sectors. The BMW i8 Futurism Edition is a practice of style. It gave the Garage Italia Customs Maestros a chance to celebrate a car which is projected towards the future of mobility. At the same time, it honours Italian art with Giacomo Balla, who is a prominent figure of the Futurism movement.”