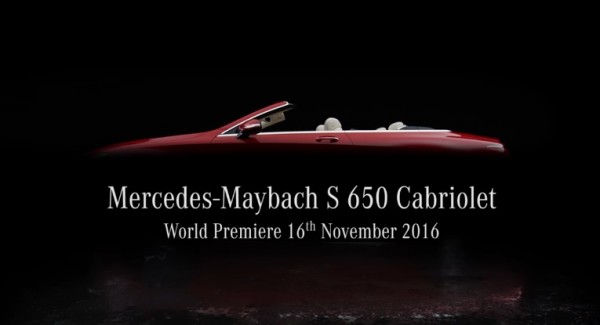 As if Mercedes-Benz didn’t have enough open-top models in their range they have just announced the launch of a cabrio version of the Maybach. Counted on to be hands down the most luxurious topless cruiser in the world, the Mercedes Maybach S 650 Cabriolet will make its global debut at the upcoming Los Angeles Auto Show.

The teaser video Mercedes has dropped does reveal a fair bit about the car, considering we already know how it’s going to look like. The Maybach S 650 Cabriolet is a super plush S-Class Cabrio equipped, as the name and fuel consumption numbers (12.0 l/100 km; combined CO? emissions: 272 g/km) suggest, with a V12 engine. The 650 badge is a new one, but it is going to be a rare beast seeing as this version of the Maybach is limited to just 300 units.

It looks like the new Maybach is nothing like the old one in terms of sales success judging by the fact that they keep putting out new versions of it. We have a sneaking suspicion that Mercedes Maybach S 650 Cabriolet won’t be the last one. Could the next Maybach be a SUV?