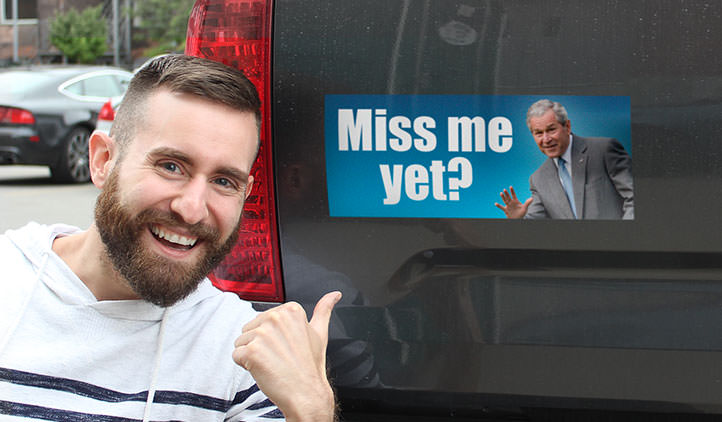 The youth of today likes to walk around pretending that the whole emoji/meme thing was their invention. But long before they got them on their smartphones the car community had been practicing communicating with stickers in form of on-point decals. And like it or not, these things are making a comeback.

You see, in today’s world where everyone has an opinion and no one shies away from expressing it, things like bumper stickers and car decals are a great way of putting it out there, as it were, reaching a wide audience, and giving a proverbial nod to those who think along the same lines as you. And you can do all that without saying a word or actually talking to another human being. Say, you are a fan of such and such political figure. All you have to do is get yourself some custom car decals related to that person, and you can effectively rally like-minded people behind you.

Same goes with sports. At the time of this writing we have the football (soccer) World Cup going on. You wanna show your support for your national team, or your favorite player? Decals are handy here as well. Car decals could be powerful things as they basically advertise beliefs and opinions. As mentioned above, they can be humor funny memes, and those of us who visited Facebook during the 2016 U.S. presidential election learned first-hand how effective memes are in altering some views and reinforcing some others. And this brings us to our next point, which is you have to be responsible with your car decals.

I know it probably sounds ridiculous because, after all, car decals and stickers are supposed to show people how fun and/or creative you are. But so were Facebook posts at one point, and again, we now know they can be damaging. Decals are like Facebook posts on your cars. They are a medium. So be careful what you put on display there for all to see. We’re not talking here about “baby on board” stickers or flame decals and stuff like that. Although those also say a lot about your personality. No, what we’re concerned with are decals and stickers charged with messages that could be controversial, which on the road means inducing road rage.

Then again, if you are driving around with a decal featuring Trump’s face and a poop emoji next to it, you’re probably asking for it. The thing is, just like a cool FB or Instagram post, a great bumper sticker could brighten up the day of everyone who sees it. It could be a motivational phrase, a witty remark, a fun little joke, or a nice little drawing with an inspiring message. You know what I’m talking about. You’ve probably seen stuff like this and may have even snapped a shot of them with your phone. Why not do this? Why not make people laugh instead of aggravate them? God knows we get enough of that on other media, so much so that we have to write an article trying to save car decals from becoming another tool for dividing the nation!

Custom car decals, to make a more car-related point in the end, are also an excellent way for those looking to modify their car. If you don’t have the money for a full paint job or a wrap, tasteful decals in interesting colors applied strategically to your car can have the same kind of visual impact. Of course, we’re not talking about redneck flames or biker skulls here. Maybe some nice stripes or a cool design. Mind you, you have to have a lot of imagination to make this work…