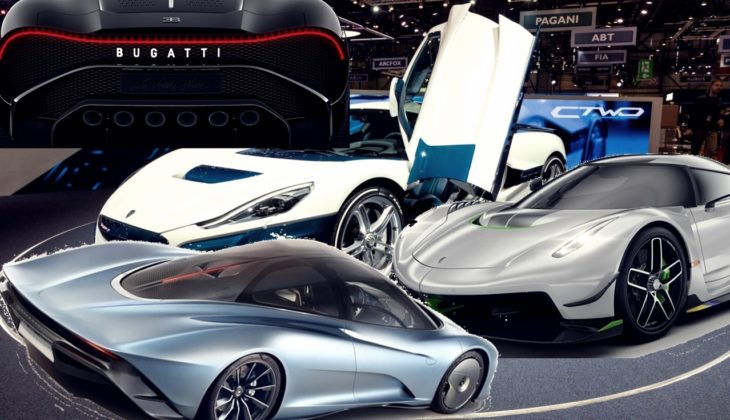 With all the brouhaha about the state of the environment and that it’s all the automobile’s fault, we were expecting this year’s Geneva Motor Show to include nothing but a lineup of weak and pasty electric sedan that look like crap and run out of juice after half an hour. Well, turns out we were only half right. While the 2019 GIMS didn’t show much love for the internal combustion, the hybrids on display were a lot cooler than we were anticipating. In fact, the show was chock full of hyper hybrid cars with horsepower numbers in the thousands.

It seems that in their effort to go hybrid and electric, car makers have collectively decided to start from the very top of the food chain, first making super hybrids and electric cars and then work their way down to more mundane stuff. Now, granted, not all of the hypercars presented at the GIMS 2019 were hybrids. But a gander through some of the most important debuts clearly shows that that’s the way we’re headed. So let’s check out the very cream of 2019 Geneva debuts, starting with this, the Rimac C Two:

We are still amazed with the Rimac One and the fact that how a little Croatian firm could make such a superb piece of super electric car. So you can imagine how stunned we are that they have now come up with a second model. And this one is absolutely insane in terms of the performance it promises. This thing packs an unbelievable 1,914 hp (1,408 kW) of power and 2,300 Nm of torque and has a zero to 60mph time of 1.85 seconds and a zero to 100 mph (161 km/h) time of 4.3, with a top speed of 258 mph (412 km/h).

Next up is the Koenigsegg Jesko which is the replacement for the Agera. True, this is not a hybrid or electric hybrid car. But the Jesko features an ultra-modern, lightweight V8 which can be run on biofuel. And the cool thing is, while this motor produces only, I mean only, 1,000 horsepower on regular fuel, E85 biofuel takes that power up to 1,600 horsepower! With a 9-speed LST gearbox and a curb weight of only 1,420 kg, you can see why this car needs such a massive wing at the back. It would have taken off into the air otherwise.

The 2020 McLaren Speedtail also showcased its hybrid excellence at the Geneva Motor Show, giving us our first complete look at the spiritual successor to the legendary F1. The Speedtail features a central driving position and a petrol-electric hybrid developing a combined 1,050PS. This car is more about handling and lap times than outright top speed, which is why it can only do 403 km/h (250mph). Yep, it seems 400 km/h is the new norm for supercars. Well, that, and insane, spaceship-like designs. We quite like it.

Besides the hybrid-electric monsters, the best of which we covered above, there were a bunch of pure petrol-powered supercars at the Geneva show this year that deserve a nod, even though they are a dying breed. One was the Bugatti La Voiture Noire. The world’s most expensive production car at 11 million EUR, this rather ugly reinterpretation of the Chiron is a gift from Bugatti to itself – a sort of homage to the brand’s glorious history. The 1,500 PS W16 engine is unchanged, but it now has six tailpipes for some reason.

We also had the new Ferrari F8 Tributo making its debut at the show, replacing the 488 GTB as the firm’s new GT super car. The F8 has a heavily turbocharged V8 with 720 horsepower, and La Ferrari-inspired design which is hard to fault. It comes with new technology as well, one of which is a new version of the Ferrari Dynamic Enhancer (FDE+) which can be activated in the manettino’s RACE position for the first time, a move designed to make performance on the limit easier to reach and control for an even greater number of drivers.