Whether you are a fan or not, the configurable, color-rich, graphics-heavy in-dash touchscreens are here to stay. They have all but replaced the traditional knobs and dials and buttons, affecting not just the way we interact with our cars, but the whole design of the cabin as well. Fair enough. They are the new fad and we have no choice but to go along with them. But the question remains, how ergonomic are these visually impressive screens? In other words, do they make our lives easier or harder? Put bluntly, do the people who design them, actually use them before signing off on them?

Some may say that it is a given that new technologies make our lives richer and more fulfilling. But if you look at the history of fads and trends from, say, 1960s forward, there have been many occasions where people picked conforming to a certain trend over personal comfort and convenience. Many different styles of clothing come to mind when one thinks of this, and a great number of astonishing hairdos. We can’t help but think that a large part of the public fascination with these touchscreens has to do with just that – the trend. 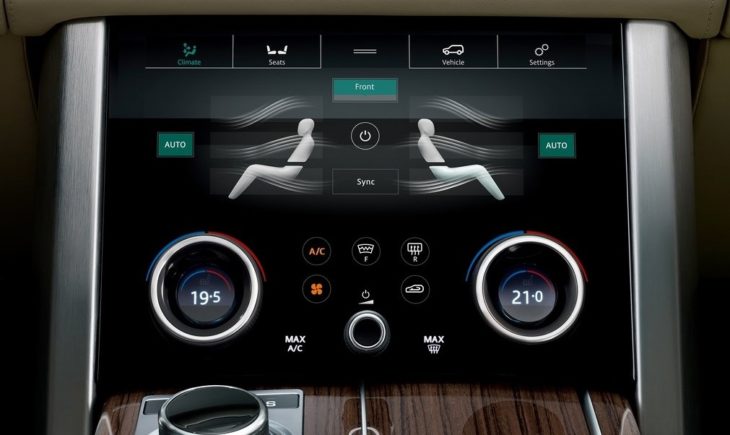 Let us illuminate this point with an example. In the latest Range Rover models you have no less than three screens: one acting as a virtual instrument binnacle, one for the infotainment/satellite navigation, and a fairly weird screen that controls the car’s climate features. Of these three, we can only make logical sense of just one. The instruments screen, which is fairly configurable and offers various views with maps and stuff is a very handy thing to have. Mind you, even that screen contains some hard to fathom menus that are pretty hard to use while driving. The infotainment screen, located in the middle of the dashboard, is the default screen which is must-have and we do not object to its existence. What we do object to, is the size of the buttons and fonts and icons on this screen. What on earth were the people at Range Rover thinking when they came up with this layout? The Range Rovers of the old used to famously have chunky buttons and levers so that they could be operated by a gloved hand. These new touch-buttons require the delicate and slender fingers of a female pianist to be clicked on first try. And that is while you are stationary. If you want to use them while driving, you also need the vision and focus of a fighter pilot.

We reckon Range Rover designers will argue that they had to go with extra small icons and buttons because of all the features integrated into the system. This is the result of a ripple effect, caused by the desire of, we imagine, some market research that said people have all of a sudden developed a hatred of physical buttons. So the brass decided the dashboard had to have the least number of buttons, and so the designers and engineers had no choice but to cram everything in a 10 inch display with icons more at home on a tablet. Why not delegate some of those functions to a set of physical buttons that are not only more convenient to use, but also easier to locate and understand for everybody?

But if you think this screen is bad, you have to have a go at trying to adjust the temperature and fan speed on the air con screen. Here we enter the realm of ridiculousness as we have to locate and press a small circular icon on the not-so-responsive screen, make sure it is showing the right shape relative to the function we want to use, and then go to the digital rotary dial to get the desired effect. You notice that throughout this procedure our eyes have been off the road and focused on some tiny icons, our mental capacities employed in the service of the hand-eye coordination required to complete the task successfully. Hmm, quite a lot of trouble to go through not to have some physical keys…