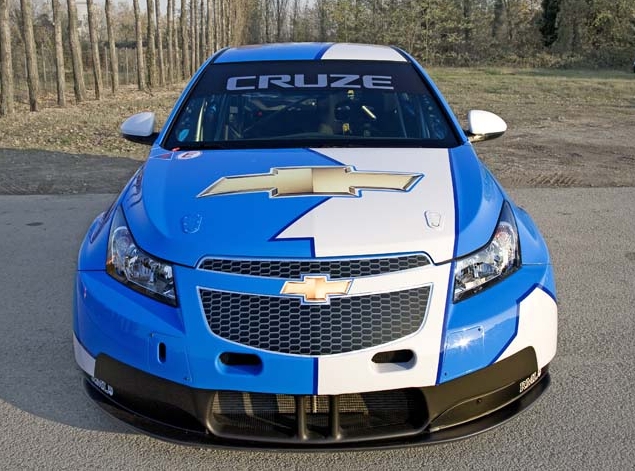 Press : The race livery of the Cruze WTCC aims at stressing the new design language for Chevrolet in Europe introduced with the Cruze street version and its striking ‘four-door coupe’ styling. It results from a team effort of different departments within GM Europe, coordinated by Phillip Zak, Director Exterior Design GM Europe, who adds: “As a racing fan myself, I was thrilled to be involved with this project. My main direction to the team was that we wanted a bold unique dynamic graphic that stands out on the race track as the bold dynamic Cruze will also stand out from competitors in the street. The team colors have been incorporated on as a continuation of our successful past. The super graphics are asymmetrical and unexpected, with a geometric execution, while we have accentuated the Chevrolet grille, which is the global face of Chevrolet. I am sure the Cruze WTCC will certainly help transmitting the dynamic spirit of Chevrolet!”

The WTCC racing program is an essential element of the marketing plan for the Chevrolet Cruze, the new compact sedan revealed last October at the Paris Motor Show, which characterizes itself by upscale design and quality within a high value package.

The Bologna Motor Show, which spans over 11 days (3-14 December) is one of the main motor events in Europe, showcasing both street and racing cars and featuring an incredible number of motor activities that attract every year hundreds of thousands of car lovers and racing fans. Eric Nève, Manager Motorsport at Chevrolet Europe, explains: “Bologna Motor Show is one of the most festive car events in Europe. We could not think of a better place to say goodbye to the Lacetti, which will be racing here (at the show race on 8 December) for the last time and give a warm welcome to new Cruze WTCC. The new race livery really encapsulates everything which Chevrolet is about: it is fresh, colorful, exciting, and out-of-the box.”

The Cruze WTCC is currently undergoing an intensive program of testing and development, in the hands of the three Chevrolet WTCC drivers (Rob Huff, Nicola Larini and Alain Menu), in view of its racing debut, scheduled for 7-8 March 2009 in Curitiba, Brazil.