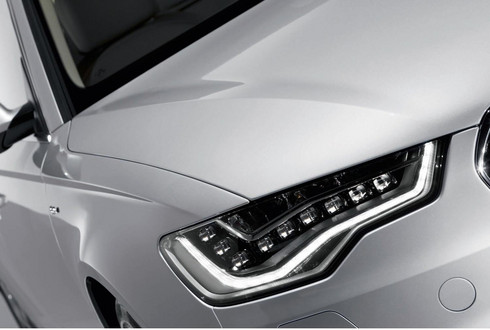 I know it’s really hard to make headlights interesting, but this new full LED headlights are a quickly spreading technology that makes the job of driving easier for you. So some of you out there might like to know more facts about them, specifically those of the new Audi A6 saloon!

The A6 Saloon is the fourth Audi model to offer all-LED headlight besides the Audi R8, A7 and A8. The first thing that springs to mind, maybe, when you think about these new lights is the power consumption. And that’s one of their strengthen points really, since they need just 40 Watts of power each, are maintenance free and long-lived.

The sophisticated LED units use just four one-chip and five two-chip LEDs to create dipped-beam light, and 24 white LEDs to make up the daytime running lights in each headlight. This keeps power consumption and maintenance down, and assures an excellent service life.

The Audi R8 was the first ever production car to feature all-LED headlights, which are now fast becoming a staple option across the Audi model range. All-LED headlights are also now available on the A7 Sportback and A8 luxury saloon, along with the new A6 Saloon.

The new LED lights are further enhanced by intelligent systems such as adaptive light control and high-beam assist, which give maximum visibility without dazzling other road users. The adaptive light system adapts the light provided by the headlights to the driving situation, with different arrangements of light when driving in the city, on country roads and on motorways.

The headlight control unit uses a small video camera in the base of the rear view mirror and route data from the optional MMI navigation plus navigation system to anticipate changes in ambient lighting. For example, the cornering light arrangement can be triggered before the car reaches a junction or corner to aid visibility on approach. 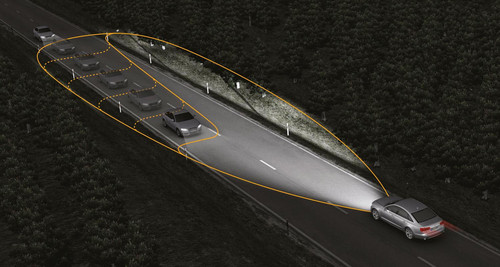 The high-beam assistant automatically varies the range and width of the headlights between dipped and full beam according to the road situation. The system also incorporates an all-weather function that uses the rear view mirror camera to detect the lights of on-coming traffic and adjust the headlight intensity to give optimum visibility in varying conditions without disturbing other road users.

The ground-breaking A6 Saloon is available to order now and prices start at £30,145 on the road for the 2.0 TDI (170PS) SE model. The all-LED headlight option costs £2,710, and as well as dipped, main beam, indicator and daytime running lights also incorporates static turning lights, high-beam assist with all-weather light function and motorway lights.