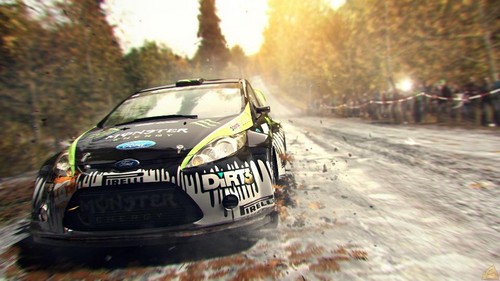 We keep hearing good things about the upcoming DiRT 3, Codemasters’ new rallying game. We recently told you about its Gymkhana battle feature, and now Ford confirms that you’ll also see the 2011 Ford Fiesta RS WRC in the game.

The physics and dynamics of the car are created with the same technology used in the development of the Fiesta RS WRC, so all aspects could be assimilated into the game. As we have mentioned many times before, spot-on simulation might spoil the fun factor a bit, but the devs promise that Dirt’s Fiesta will give you most of the fun as driving the real thing in the real world, without any of the drawbacks.

DiRT 3 is the eighth version of Codemasters’ rally games which begun with the ‘Colin McRae Rally’ in 1998. Ford has a long history of participating in video games development which has started with the same Colin McRae game and the Ford Escort WRC 4WD.

Video games have become so realistic,” says Mark Bentley, licensing manager, Ford Global Brand Licensing. “They provide Ford with a golden opportunity to leave a lasting impression about our performance cars and racing heritage.“Ford works closely with video game developers to ensure accuracy and authenticity of Ford vehicles in games. We are involved from start to finish during the development process and provide publishers with key assets such as vehicle designs, detailed exterior and interior photos, vehicle specifications and recordings of engine sounds. The more we support a video game project, the better the end result will be.”