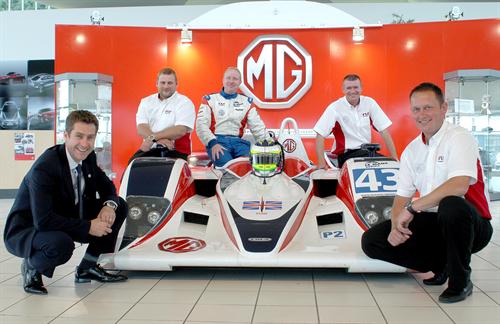 MG is finally back on track with its Chinese owner SAIC. With car business going smoothly, MG is now returning to international motorsport.

Granted, they are not making great cars, but they’ve managed to found good markets in some parts of the world, mainly Asia and south America, and now want to blow up the cash they made on motorsport! MG Motor UK has teamed up with Team RLR, which runs an MG Lola EX265 sports prototype in the Le Mans Series of endurance races throughout Europe.

The car’s first outing will be at Silverstone Le Mans Series race on September 11. They hope to take part in the Le Mans 24-hour race next year and look at the 2011 season as a warm up.

NickReynolds, Team RLR team principal, said: “We have one of the best prepared teams in the Le Mans Series, and the support from MG will ensure that we can be even more competitive both on and off the track throughout the 2011 Le Mans Series season and beyond.

“The deal is a great fit for both parties due to the heritage and provenance of the MG Lola EX265, and we are excited to be working closely with such a famous and much loved car manufacturer.  We look forward to repaying MG for its confidence in us by providing many exciting moments for the company and its huge number of followers in the races ahead.”

Guy Jones, MG Motor UK Sales and Marketing Director, said: “MG is delighted to be supporting Team RLR and the MG Lola EX265, which is such a famous car.

“The MG brand is synonymous with motorsport and with the new MG6 GT and Magnette models now in the market place we need to raise the profile of the brand. Supporting team RLR with the MG Lola in the exciting, high profile, Le Mans endurance series is a perfect fit for the brand and the team.”