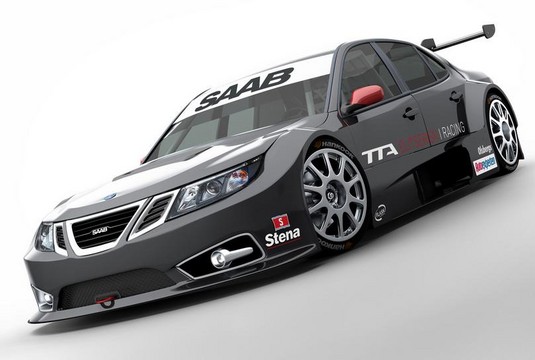 The spirit of Sierra-Alpha-Alpha-Bravo will live on in the world of motorsport, even though the company itself is pretty much consigned to the history books. Four Swedish blokes, Jan “Flash” Nilsson, Mattias Andersson, Linus Ohlsson and a yet to be revealed driver, will be driving four specially-prepared Saab 9-3 sedans in this year’s Swedish Racing Elite League to honor the charismatic car maker.

The racing cars are still in development and will be tested for the first time at a secret location. But based on the images the team has released, the racing 9-3 features a full-on aero kit with air splitter at front and massive wing at the back. It looks business. There’s no details on the car’s technical specs, but it will be following the TTA rules.

Check out team members’ comments below… 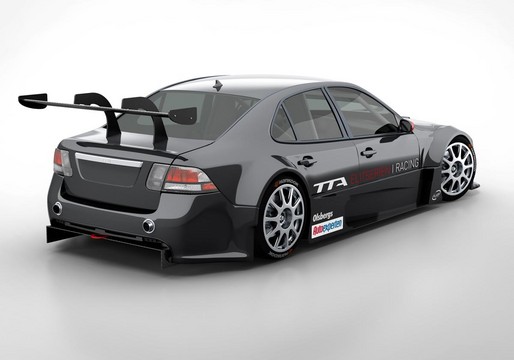 “I have longed for 40 years to see the fight between Saab and Volvo on the race tracks. It becomes reality this summer and my biggest dream is to get all Saab fans to the TTA races to cheer us on,” said Jan “Flash” Nilsson, driver and Managing Director of Flash Engineering.

“I had a real ‘wow-feeling’ when I saw the Saab in TTA-design for the first time. It is going to be great fun racing with a Swedish car and most of all to pick up the classic Saab versus Volvo fight that has been going on since I was a child. I am for sure looking forward to the coming season,” said Mattias Andersson, former IRL and CART driver.

“It is going to be great to race with Saab, a car that always has been special for me. It is a really strong feeling to step up to the Racing Elite League with Team Tidö and Flash Engineering this year and I am going to do my utmost to deliver top results,” said Linus Ohlsson, third in the Carrera Cup Scandinavia 2011.

“You don’t have to be much of a patriot to suffer with Saab and their employees. I have had the fortune to meet many of Saab’s motorsport drivers during my few years within the sport such as Stig Blomqvist and more. That is why it is going to be extra fun to race a Saab in TTA. Saab has lead much of the development for the cars of the world and now Team Tidö and Flash Engineering wants to lead the development within Swedish motorsport with TTA,” said David von Schinkel, Managing Director of Team Tidö.

“I am very proud to have been a part of Saab. I think that the initiative of Flash Engineering to honor Saab is amazing and you understand that there is so much feelings surrounding Saab with the Swedish people,” said Jan-Åke Jonsson, Managing Director for Saab Aotomobile AB from 2005 to 2011.