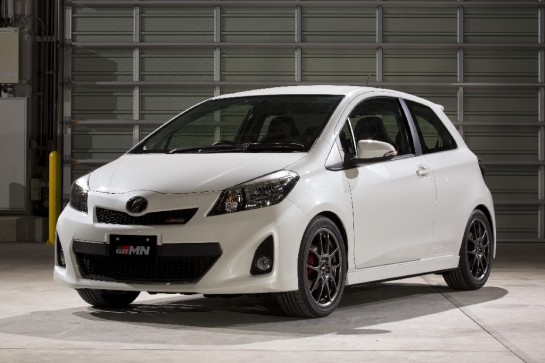 Besides making an amazing 330hp Toyota GT86, Gazoo Racing is bringing a customized Toyota Yaris – known as Vitz in Japan – concept to this year’s Tokyo Auto Salon. Based on the three-door version of the car, it is powered by a turbocharged engine.

GRMN Yaris is actually based on the Australian-spec’ model, and its turbocharged 1.5-litre engine develops 148bhp/110kW and 205Nm of torque. Power is still sent to the front wheels.

Apart from the engine, Gazoo has fitted this car with sport suspension, uprated disc brakes and a more powerful drivetrain. The idea was to make a pocket-size track toy. These changes turn the Yaris into a fun little car. And it is basically production-ready. There is nothing too fancy about it. That said, the price tag for such beefed up model might not make sense to the ordinary Yaris buyers.

Other bits and bobs added to this concept car include aluminium wheels, sports seats and pedals and modified rear bumper, headlights and rear clusters.